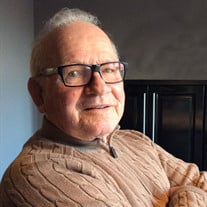 In Loving Memory of Our Father Adrian Vanderheyden Adrianus van der Heijden was born September 12, 1925 to Antonia Maria de Groot and Gerhardus Franziskus van der Heijden, in their home number 13 Zandstraat in Gennep, a small town in the province of Limburg, The Netherlands. He was the second child of nine siblings, Fons, Lucy, Dien, Gijs, Leo, Jan, Annie, Lenie. He sought adventure and joined the Dutch Army. He was sent to Great Britain for training in Glasgow, which he recounted with fond memories. In 1947 he set sail for Indonesia, and served there as Korporaal in the 2-2 Mitrailleur Bataljon until 1950. Indonesia was fighting for Independence from The Netherlands. As he matured, our father, came to understand the enormity of politics, and he fully believed in the right of Indonesian citizens to a free and independent state. He came to recognize the damage of colonialism. Our dad loved animals and all animals loved him. He had a pet monkey in Indonesia, and squirrels would sit on his knee in our backyard. He was a true student of history, with a vast knowledge of European 19th century history and politics. He read countless books on those topics. He immigrated to Canada in the fall of 1953, landing by boat in Halifax, and settling in Toronto, in a Dutch boarding house on 269 Pellatt Avenue, in Weston. He had already met my mom, Gerarda Cornelia Liduina van der Klaauw in Holland and she arrived in Canada on November 12, 1957. They were married in North York on June 7, 1958. Our mom passed away January 10, 2007. Our dad was a very kind and gentle man who truly never had an unkind word to say about anybody - such a rare quality and a gift, and because of his quiet caring nature he was adored by all who knew him. He respected all races, creeds and colours of peoples as fellow human beings. Adrian VanderHeyden is survived by his three daughters Dori, Joann, and Bernice, his eight grandchildren Jessica, Jordanna, Meagan, Troy, Adrian, Jade, Christopher, and Alexander, his four great-grandchildren Grace, Esmée, Sadie, and Felix. He also has one surviving sister in Holland Lenie van den Berssalaar. Rest In Peace Our Sweet Father

The family of Mr. Adrian Vanderheyden created this Life Tributes page to make it easy to share your memories.

In Loving Memory of Our Father Adrian Vanderheyden

Send flowers to the Vanderheyden family.