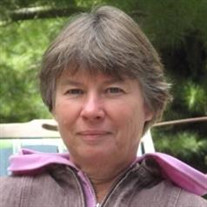 Alexa Maria DeWiel, born Hamburg, Germany, January 11, 1949; died at home in palliative care, Toronto, Ontario, December 22, 2017. A message for my family and friends: My life has been an interesting one, at least to me, and throughout it I've taken many snapshots, most of which are digitalized. During the 1950s and 1960s, my mother always had the radio on. My adolescent life was inspired and informed by stories of the Civil Rights movement, the Vietnam War, and the music of the day. I was lucky to grow into young adulthood during the 1970s, which for me was a highly active time in all regards, including social justice work in the women's movement and the environmental and aboriginal rights movement of the times. I was one of the founding members of Nellie's Hostel for Women in Toronto. I co-hosted a women's community radio program (Radio Free Women) in Toronto, and later in Ottawa (The Ottawa Rose Show). I published a book of poetry, Conversations with Bibi, (Canadian Women’s Educational Press, 1975) housed in the Thomas Fisher Rare Book section of the University of Toronto Library. My interest in community radio landed me a job with the federal government and brought travel across the near-North from coast to coast, gathering information with which to fund First Nations indigenous language community radio stations. In 1979, I met Kathy Vance who has been my sole partner and companion in life ever since. We married on November 29, 2008, the same month that Barack Obama became President in the U.S. Kathy and I have faced both births and deaths as well as illnesses among our friends and family and have had many wonderful times and celebrations. We are as different as night and day in superficial ways yet shared a common core philosophy of life and approach to people and animals. I hope Kathy will be blessed with old and new friendships and the love that she deserves. She has taught me much about the appreciation of being alive. I have loved her family dearly as she has loved mine. xxooxx Alexa was asked not too long ago why she as a shy and private person would agree to appear in a feature film in the 70s about two women being in love with each other. “I wanted to stand up for lesbians. I did it for love.” Alexa counted herself in the “me too” movement and was thrilled that men but especially women – were standing up with women – to expect a life without abuse. Alexa was an agent in home sales in Toronto and juxtaposed this with decades of volunteer years advancing the integrity of non-equity co-op housing. Cancer kills people in many ways, gradually taking away their ability to eat is one of them – Atul Gawande on Being Mortal was her guide through this, and her desire for the choice of Medical Assistance in Dying was unfulfilled. Those wishing to make donations: Democracy Now Radio with Amy Goodman; Farm Radio International; the Donkey Sanctuary of Canada. Remember Alexa in your own way. Condolences may be offered via Aftercare at www.aftercare.org. A celebration will take place at her home January 20, 2018 – 2-4 p.m. Burial will take place in the Eastern Townships in the springtime. Alexa showed me chanting Nam myoho renge kyo, tender love without fear or jealousy, grace under fire, how to swim like a fish through troubled waters, how to release a grudge, and how to be loved deeply. Thank you Kathy

Alexa Maria DeWiel, born Hamburg, Germany, January 11, 1949; died at home in palliative care, Toronto, Ontario, December 22, 2017. A message for my family and friends: My life has been an interesting one, at least to me, and throughout it I've... View Obituary & Service Information

The family of Alexa Maria Dewiel created this Life Tributes page to make it easy to share your memories.

Send flowers to the Dewiel family.