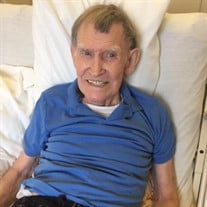 Feb.1930 – April 2019 Passed away at 89 at Heritage Nursing Home, Toronto. Born in Bellshill, Scotland, Alex is the last of 12 siblings. He came to Canada in the early 1950’s as a carpenter to be part of the rebuilding after Hurricane Hazel. He later joined the Post Office and was in the forefront of the Letter Carriers Union, fighting for a living wage for its members and later with CUPW. He is predeceased by his wife Linda (2009) and Leona (1973). Father to Michelle and Alice, stepfather to Karon, Sandra, Jeanette, Paul, Scott, Cheryl, Dale and grandfather to Owen and Ben, Alexandra, Sherry, Chantal, Lisa, Patrick, Samantha, Dana, Jessica, Sean, Rob and Michael. Will be missed by his many great grandchildren and special friends The Chavez family. As requested by Alex, there will not be a funeral service.

The family of Alexander Power created this Life Tributes page to make it easy to share your memories.

Send flowers to the Power family.