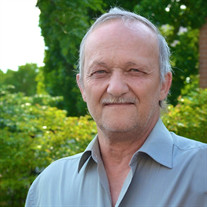 WOLBAUM, Mcpl (ret’d) Alexander Jerome (Alex, A.J.) – 64 years – Alex Wolbaum passed away as a result of a sudden cardiac arrest on Christmas Day, December 25, 2017 at Ross Memorial Hospital in Lindsay, Ontario. Alex proudly served his country for over 20 years as a member of the Canadian Armed Forces. Alex actually began his working life in 1972 as a member of the Royal Canadian Regiment. He was posted to Germany where he served with the 3 Canadian Mechanized Commando unit. Upon repatriation back to Canada he was reassigned to 2 RCR at CFB Gagetown where worked his way up the ranks to Sergeant before remustering to the Logistics Branch as a Supply Technician. He was then posted to CFB Shilo, Manitoba where he continued to work as a Supply Technician until he retired at the rank of Master Corporal in 1996 with several nicknames including Relic, Splinter, and The Ancient One. Throughout his military career Alex proudly completed several peacekeeping missions in Cyprus and Kuwait. After retiring from the Canadian Armed Forces, Alex continue to support his country and Canadian Armed Forces in Afghanistan where he worked as a civilian Supply Technician with SNC Lavalin from 2007 until 2011. Throughout his life, he was known by many roles. Loving Husband, Father, Brother, Uncle, Papa, Cousin, and Friend. Alex was known for his witty and sarcastic sense of humour - if you couldn’t take some good natured teasing you would soon learn how after spending some quality time with Alex. His core values were honesty, hard work, and integrity. Common sense and “everything in moderation” were his rules to live by. He will always be remembered as someone you could count on in a crisis and who you could always turn to for some advice or a helping hand. He was the devoted son of Katherine and Adam Wolbaum (predeceased). Beloved husband to Theresa for 34 years. Cherished father to Tracy and her husband Aaron, Crystal and her fiancé Steve, and his youngest son Michael (Mike). Proud Papa to Jimmy (James), Davey (David), Maddy (Madison), and Brody. Loving brother and brother in law of Theresa (Kuntz) and her husband Eddie, Joe and his wife Jean, and Chris (predeceased). Brother in law to Florence, Eileen (predeceased), Ted, Jimmy (predeceased) and Wendy. Uncle to David, Donald, Wendy, Tracy, Mark, Tim, Jason, Jared, Roberta, Kim, Kevin (predeceased), David, Jonathan, Lisa (predeceased), Teddy, Jennifer and Danny (predeceased). Lifelong friend to his fellow Canadian Armed Forces colleagues Kevin (Ducky) Mallard, Kirk Jones, and Kate Doucette among others. Alex's family is thankful to the friends and family who have been there throughout this difficult time. Our thanks especially to Ross Memorial Hospital Emergency and ICU Nursing staff as well as the Woodville Volunteer Firefighters and the Paramedics who were the first responders. A celebration of Life will occur on Saturday, February 3rd, 2018 from 1:00 pm to 4:00 pm at the Woodville Legion and will begin with the Legion Order of Service. Donations may be given to the Royal Canadian Legion.

The family of Mr. Alexander Jerome Wolbaum created this Life Tributes page to make it easy to share your memories.

Send flowers to the Wolbaum family.