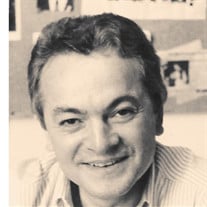 September 8, 1937 - February 21, 2021 Andrei passed away peacefully holding hands with his beloved wife Irene after a number of years of illness. He had a life filled with adventure across many continents. Andrei will be remembered for his kindness, hard work, independence, which some might call stubbornness, and his sense of humour and love of life. He spoke multiple languages, could recite Shakespeare with ease and made friends with every cat he ever met. Andrei was born in Novoselec, Croatia and spent his early years in a partisan camp as his parents fought with Tito against the Nazis. After the war he began attending a youth theatre program in Zagreb and by age 17 was playing the lead role of Romeo, in the Shakespearean tragedy and entered the Academy of Dramatic Art, starting his lifelong love affair with theatre and the arts. Despite his stateless status, Andrei’s uncle sponsored him to go to Australia where he spent five years during which he acted in the first cigarette commercial filmed in Australia and graduated from the International College of Hotel Management after which he joined the Hilton organization and worked at the Sydney Hilton. He returned to Europe to manage the USA’s Officers Mess in Berlin and then joined the management team at the London Hilton, while still working as an actor on many famous shoots, including The Beatles “Help”. They weren’t necessarily big parts, but they were fun times. He met many celebrities during this time and once had to chase down Zsa Zsa Gabor after she left the London Hilton without paying her bill only to have her wave him off saying “Send it to Conrad, darling”. Andrei moved to Canada in 1967 and continued his career in the hospitality industry opening and managing many hotels, restaurants and bars, but his love of theatre never left him, and he returned to the arts in 1979 opening his own agency representing actors, writers and directors in theatre, film and television. He had a great gift for business and at the same time a great love and sensitivity for the arts. Andrei will be sorely missed by his wife Irene and they would have celebrated their 45th wedding anniversary in the spring of 2021. They married in 1976 in Las Vegas in matching cowboy/cowgirl attire to celebrate the occasion. He will also be sadly missed by his extended family and dear friends who understood his kind, caring nature and delighted in many shared adventures, moments of hilarity, and laughter at his funny, corny and sometimes really silly jokes. He was truly one of a kind and he will be dearly missed. In view of Covid restrictions, a Celebration of Life will take place at a later time when we can all gather safely to remember and celebrate Andrei. If you feel so moved, please consider a donation to a charity in memory of Andrei. Donations to kensingtonhealth.org, who provided such kind care to Andrei over the last four years, or any animal care or cat rescue charity would be appreciated.

September 8, 1937 - February 21, 2021 Andrei passed away peacefully holding hands with his beloved wife Irene after a number of years of illness. He had a life filled with adventure across many continents. Andrei will be remembered for his... View Obituary & Service Information

The family of Andrei Zeljko Pauzer created this Life Tributes page to make it easy to share your memories.

Send flowers to the Pauzer family.