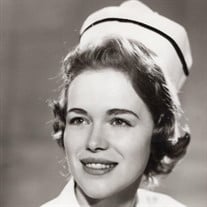 Ann Weissengruber RN Née Ireland Born in Burlington, Ontario, November 9, 1940. Sadly, on August 7th, our beloved Ann passed away due to respiratory failure. She had been seriously ill for a number of months. She is survived by her husband Max. They enjoyed a unique marriage of almost 55 years. She also leaves her three devoted sons, Erik (Robin and granddaughter Tabitha), Jon (Tara) and Adam (Gail) plus her three remaining Ireland brothers Jake (Debbie), Robert (Sue) and Michael (Jackie). Her elder brother Jim (Irene) pre-deceased the sister he loved and in whom he took great pride. Ann chose cremation and a safe private ceremony in lieu of a funeral service. Because she was raised with four energetic brothers, Ann was well equipped to ride herd on three sons and an often-hapless husband, Max. After graduating from Hamilton General Hospital’s School of Nursing in 1961, Ann worked in Labour and Delivery at Toronto General Hospital. She then attended University of Western Ontario to study advanced nursing instruction. Later, at Toronto Sick Children’s Hospital, she worked ten-hour days as a nursing instructor. Ann retired from nursing in 1968 to concentrate on raising three sons, which was always her significant life’s desire. She was high-spirited, funny, outgoing and someone whose laughter and smile lightened any room that she entered. Although she was a most private person, Ann was very sympathetic and sensitive towards needs of others. Ann was profoundly unselfish by nature, one whose obvious physical beauty was matched by the beauty of her soul. Ironically, although she was well-loved by many, she had difficulty accepting genuine compliments from others. This was an unfortunate personal loss. One person who did tangibly demonstrate his high regard for Ann was the award-winning Vancouver composer, Michael Conway Baker. He was someone Ann’s husband had come to know quite well. Michael had written a piece called Rhapsody for Rachmaninoff, the Russian composer of beautiful melodies. Meanwhile, Ann had always insisted that music must have a discernable melody or tune, something that allows one to sing, whistle or even hum. Once Michael learned of their shared love of melody, he dedicated the piece to Ann W. Her modesty was such she didn’t want her actual identity to be revealed, despite the great honour of such a personal dedication. Ann’s husband is a serious student, collector and blogger of classic American popular song. He called her Ann of a Thousand Songs because he had discovered her amazing ability to recall the lyrics of over a thousand songs of all kinds. Once she heard a word or a phrase, it would trigger a song involving that thought. At least 10-15 times a day, she would burst into song, complete with lyrics and sung with perfect pitch. Two days before Ann’s passing, she and Max entertained St. Mike’s patients and doctors with several songs from the musical Guys & Dolls: If I were a Bell, Luck Be a Lady Tonight and Take Back Your Mink (whereupon she cracked “You never gave me a mink.”) For those of the many who knew her, the world will be a less welcoming place but we are able to take heart from the words of a song by Irving Berlin, The song is ended, but the melody lingers on You and the song are gone But the memory lingers on. A donation may be made to the SickKids Foundation, 525 University Avenue, Suite 835, Toronto, Ontario Canada M5G 2L3, or online at: www.sickkidsfoundation.com Condolences can be made online at: www.aftercare.org/obituaries

Ann Weissengruber RN Née Ireland Born in Burlington, Ontario, November 9, 1940. Sadly, on August 7th, our beloved Ann passed away due to respiratory failure. She had been seriously ill for a number of months. She is survived by her husband... View Obituary & Service Information

The family of Ann Weissengruber RN created this Life Tributes page to make it easy to share your memories.

Send flowers to the Weissengruber family.