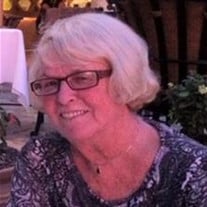 B. Mae Byrne, BBA (U.N.B.);CPA, CA. 1946 – 2018 Mae Byrne passed away at Sunnybrook Hospital, Toronto, on Thursday, 13 December 2018, with her husband at her side. Her death, at age 72, was from respiratory failure. Mae was born near Speerville, New Brunswick, in a car heading to the Woodstock hospital, to parents John Speer and Glenna (Porter). She was the middle of five children including Roberta, Shirley, Donna and John. Mae grew up on a farm, attended public schools first in Limestone, and then in Debec where she graduated first in her class and was valedictorian. She received scholarships to the University of New Brunswick, finished first in her first year and graduated with a Bachelor of Business Administration in 1968. Among her summer jobs in the university years she worked in the Sea Captain’s Loft in Saint Andrews N.B. in 1966. There she met John Byrne from Trenton, Ontario,a summer student at the research station of the Fisheries Research Board. In June 1968 Mae began her professional career in Toronto with Clarkson Gordon, a public accounting firm. Meanwhile John was finishing his graduate work and beginning his career as a fisheries biologist on Lake St. Clair near Windsor, Ontario.Mae and John eloped on22 November 1968 and were married at Toronto City Hall. In June 1969 Mae transferred to the Windsor office of Clarkson Gordon to be with John. They set up residence in a drafty rented farmhouse ($80 per month) in Stoney Point (Pointe aux Roches) near Lake St. Clair. In 1972 Mae and John moved back to Toronto. This marked the third time Mae moved for John and his career. After this time, John’s jobs moved several times and Mae stayed put. Mae had a long and successful career as a Chartered Accountant. While with Clarkson’s she received her CA accreditation in 1971 and later was promoted to audit manager. At one point she was one of only two female CAs in the entire firm. In the mid-70s Mae moved to Coopers & Lybrand as an audit manager. In the1980s she started her own practice. She felt liberated as her own boss in her new environment and built a significant business as a sole practitioner, first in an office on Dundas Street and finally on St. Clair Avenue. (John thought there was humour and irony contrasting her job in Windsor on Lake St. Clair which she hated and her final office location which she loved.) She prided herself on the quality of her work and gained the respect and admiration of many clients and co-workers. Among Mae’s contributions to accountancy were her membership on the Discipline Committee of the Institute of Chartered Accountants of Ontario and her work as a Practice Inspector. In 2012, after 44 years, Mae mostly retired, keeping a small number of her favourite clients. Mae was a good example of living well being the best revenge. Although she thoroughly mastered the accountancy arts throughout her career, while working for large accounting firms,she also overcame the challenges of a pioneer woman in a male dominated field with its attendant discrimination in terms of salary and advancement.She used the fruits of her talent and hard work to dress well, travel often, dine on the best food and wine, and drive with the convertible top down. She read countless books and newspapers. Her morning ritual included reading the obituaries and doing NY Times crossword puzzles. A good travel year would include Mexico, Las Vegas, France and Hawaii.She loved good wine especially from Meursault and Puligny Montrachet in Burgundy. Unfortunately Mae was a heavy smoker for years and developed bladder cancer in 2000. However with surgery and chemotherapy she was cured. Mae and John quit smoking. More than 10 years later, Mae faced the challenge of hypertension and artery disease which were controlled through medication and a coronary artery stent. The year 2018 brought more stresses. In June, Mae had cataract surgery. In September, her sister Shirley Cluff died after a fall in Woodstock, N.B. In November, Mae caught a bad cold in Mexico and was having trouble breathing on returning home after a vacation during which she and John celebrated their 50th wedding anniversary. A trip to the doctor revealed a serious lung problem. After an immediate trip to Sunnybrook Emergency, Mae suffered respiratory failure. As Mae requested, there was no funeral and her body was cremated. Because of frozen ground now, scattering of her ashes in a garden in Saint James Cemetery, Toronto, was postponed until May 2019. Around that time there will be celebration of life gatherings in Toronto and Woodstock, N.B.. Included in Mae’s many joys were the friends she made along the way, both among her accountancy peers and clients. They describe her as well respected, loyal, intelligent, happy, generous, kind and considerate, a great friend, and a consummate professional.Mae will be remembered by her many friends, especially Joanne McKenna and Sheilah Reid. The Byrne, Speer, Murray and Porter families will miss her love, laughter, humanity, generosity, and impressive professional advice in tax and estate management matters. She is survived by husband John Murray Byrne; siblings Roberta Flewelling (Richard), Donna Kennedy (Linwood) and John Ensley Speer (Barbara); brothers/sisters in law James Cluff (Shirley, deceased); Jane Byrne, Cathy Byrne (Bernard, deceased) and Malcom (Lynda) Byrne; and numerous nieces and nephews. Arrangements were provided by Aftercare Cremation and Burial Services, 1097 O’Connor Drive, Toronto, Ontario M4B 2T5, 416-440-8878. www.aftercare.org For those who wish to donate in Mae’s memory in lieu of flowers, suggestions include Ontario Lung Association, Heart and Stroke Foundation of Canada, Canadian Cancer Society and Salvation Army.

The family of B. Mae Byrne created this Life Tributes page to make it easy to share your memories.