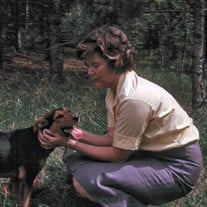 Barbara Doran (née Sagar) November 14, 1928 - April 6, 2020. Beloved mother to Susan, Molly, Michael, and Peter Doran and Mary Johnson (Doran). Treasured friend to Andrew Cline and Paul Brooks. Beloved wife to the late Dr. Terry Doran and cherished daughter of the late William Lister Sagar and Margaret (Featherstone) Sagar. Dear aunt to the large Pelton clan. A loving, fun grandmother who adored her grandchildren Aidan Brooks-Doran, Mehari Doran-Cline, Zerihun Doran-Cline, Diane Doran, Melany Doran, Kimberly Doran, William Doran, Meg Doran, Jack Johnson, and honorary grandson Christopher Frauley. Barb grew up near Yonge and Lawrence in North Toronto and attended Bedford Park Public School and Lawrence Park Collegiate, an honours student throughout. She lived almost her entire life in this neighborhood until she was admitted to a long term care facility in 2018. Barb met Terry on a blind date while both were attending the University of Toronto. They were married on June 20th 1953 at St George’s United Church and soon after left for several years to Longlac, Ontario, where it was so cold the tires on their car sometimes froze. They returned to Toronto in the late 1950s and led a full life enjoying their children, grandchildren, extended family and many friends. The house they bought on Golfdale Rd. served as a family home for over 50 years. Barbara had many dear, lifelong friends, among them her soul mates Bev Billes and Shirley Patrick. She volunteered for many years at the Bell Canadian Open. It would be an understatement to say that Barb loved animals. Anyone who rang the family doorbell remembers the cacophony that elicited and the greeting committee of large and small pets who nibbled on visitors' shoes and personal items. Barb loved to travel. She arranged many world adventures with her family, which ignited a spirit of curiosity in her children. Barb was generous. People around the world had hearing aids paid for, dental work done, and even surgery performed with her personal gifts. Locally, she was very active in the community. There was no one, and no animal or charity, that she would not help out if in need. Barb found great peace and joy at the family cottage on Lake Kashwakamak with Terry, family, friends, her dogs and nature. Barb and Terry attended Fairlawn Avenue United Church. Life became more challenging for Barb in her last decade, so we are grateful to daughter Susan Doran, who lovingly orchestrated her care, and to Barb's steadfast caregivers, particularly Rona Mae Aguiler and Vanessa Gabayeron. Barb will be laid to rest beside the love of her life, Terry, at Mount Pleasant Cemetery. Services will be planned later in the year. Rest now, Mom.

The family of Barbara Elizabeth Doran created this Life Tributes page to make it easy to share your memories.

Send flowers to the Doran family.