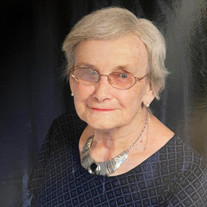 Beverley Joan Coburn (Miller) April 28, 1930 – June 21, 2021 Beverley was born in Toronto. She worked her way through the Toronto school system graduating from the University of Toronto with a Bachelor of Science in Nursing in 1954. Beverley had won a Red Cross bursary so her first job was working for the Red Cross Hospital in Thessalon. She later was the nurse in charge at Whitney. In 1955, she began a two-year stint as a public health nurse with the Etobicoke Department of Public Health. In 1957 Beverley joined the Ontario Society for Crippled Children as a nurse working out of their Peterborough office. She thoroughly enjoyed working with the kids. In 1959 she was invited to return to her Alma Mater, the School of Nursing at the University of Toronto, as a lecturer in public health. In 1966 Bev had her first of two children and decided to stay at home. While raising a family she was active in community affairs such as the after-school programme at John Wanless School and the United Way. In 1980 Bev returned to work as a lecturer and clinical instructor at George Brown Faculty of Nursing, retiring in 1995. Bev was an active volunteer throughout her life. As a teenager she led a company of Girl Guides. In 1980 she returned to the Guiding movement as a leader, working on a number of committees and culminating as a member of the National Council of the Girl Guides of Canada. In retirement she joined the Senior Alumnae of the University of Toronto. Along with coordinating many activities, she served a term as President of the Association. The Church also played an important role in her life. She met her husband John at the Trident Club through church. In 1976, along with her husband, Beverley joined Timothy Eaton Memorial Church in Toronto. She was active in various groups including the social and governance activities. She also took a course to become a Stephen Minister. Recently she was warded a pin marking 15 years of service. Her volunteer work continued when she moved into St Clair O’Connor Community (a Mennonite project) in 2015. She plunged into community activities serving on several committees. In June she completed four years of service on the Residents’ Council and two years on the Board. Beverley’s life was not complete without her love of art. She was introduced to the world of art as a child. Each Saturday morning her Mother would drop Beverley off at the Art Gallery of Ontario where Arthur Lismer taught her the wonders of art. She called him “Mr. Gismer”. This talent flourished over the years. Outside in the hall of her apartment hangs a painting “Tranquil Lake” donated to the community by the artist in 2017. Greater than these accomplishments were the strength and love of the women as a loving wife to John, a loving mother to Nancy Fischer and Andrew (Tara Steele), a loving grandmother to Sara and Ben Fischer and a friend to their father Garry Fischer. These people are left to mourn a loss and celebrate a life well lived Cremation has taken place. A celebration of life will be held at a later date. Internment at York Cemetery Toronto.

Beverley Joan Coburn (Miller) April 28, 1930 &#8211; June 21, 2021 Beverley was born in Toronto. She worked her way through the Toronto school system graduating from the University of Toronto with a Bachelor of Science in Nursing in 1954.... View Obituary & Service Information

The family of Beverley Joan Coburn created this Life Tributes page to make it easy to share your memories.

Send flowers to the Coburn family.