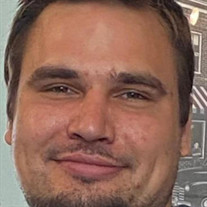 It is with much sadness that we announce the unexpected passing of Brandon at his home in Hampton on Friday, September 24, 2021. Brandon will be deeply missed by his parents Sheldon and Denise and his two older brothers Matthew (Erin) and Adam; his daughter Aska-Mina; his grandparents Pat and John Walker, Dennis and Donna Vince and predeceased by Eleazor and Ruth Pickett; his immediate family Aunt Roxanne, Uncle Danny, cousins Alexis and Deanna Lemajic, Aunt Sheree and Uncle Regan Haydu, Uncles Brian (Laura/Harmonie/Brooklynn/Lumia) and Cheyne Vince, Aunt Jaki, Uncle Robert and cousin Jesse Mackinnon, Aunt Lisa, Uncle Rob and cousins Robyn (Tyler/Thomas/Travis Quinn) and Brian Hobbs (Leanne/Cyrus), Bob and Adele Coleman and his extended family and friends in both Ontario and Newfoundland. Growing up, cousins Matthew, Alexis, Adam, Deanna and Brandon were inseparable, getting into all kinds of mischief during weekend sleepovers at Nan and Pop Pickett’s house or taking trips to the beach or a cottage, and even a road trip to Newfoundland with the five children under the age of 6 (and their brave parents) for their great grandparents’ 50th wedding anniversary. Taking a family trip to Disneyland with Nan and Pop Walker and building a sand car on the beach or taking his “pet” plastic alligator for a walk around the pool, Brandon was always keeping everyone busy with his antics. He also loved going with Nan and Pop Vince to Haliburton where he got to spend time fishing and camping and finding every bug/worm/frog that he could. Brandon was also involved in all sports – from hockey, ball hockey and soccer to football, and lacrosse – he would try anything once, even just for a season to experience something new, test his skills and meet new people. His real love was hockey and he even travelled to Europe to play with his team. He would eat, sleep, and breathe it – to the point that he would sleep with his gloves on or be standing at the door waiting to go to a game or practice. Brandon was a carefree and adventurous man with a silly and infectious laugh that could be heard echoing throughout the house. He was often funny without even trying, and loved playing pranks, including dressing up (just like his Poppy Pickett) at family functions to play tricks on others. Brandon loved all things food and he always wanted to spend time with his family. Although he is no longer with us, Brandon will always be a part of our lives through his daughter Aska-Mina. His sudden passing is made a little easier knowing that he is with his Nan and Pop Pickett, and that Nan is keeping both of them in line. A Celebration of Life will be held at a later date. In lieu of flowers, a donation in Brandon’s name can be made to: Canadian Tire Jump Start Program or Their Opportunity (Oshawa Hawkeyes Football Club). https://jumpstart.canadiantire.ca https://theiropportunity.com

It is with much sadness that we announce the unexpected passing of Brandon at his home in Hampton on Friday, September 24, 2021. Brandon will be deeply missed by his parents Sheldon and Denise and his two older brothers Matthew (Erin) and Adam;... View Obituary & Service Information

The family of Brandon James Pickett created this Life Tributes page to make it easy to share your memories.

It is with much sadness that we announce the unexpected passing...