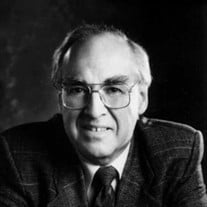 It is with great sadness that we share the news that Bruce Alan Raymond passed away in his sleep on Sunday April 4, 2021. Though suffering from dementia, Bruce was being wonderfully cared for in the Veterans Centre at the Sunnybrook Health Sciences Centre in Toronto. Bruce was born on May 20, 1925 in England and moved with his parents shortly thereafter to Montreal to live in Verdun. His passion for theatre began as a young man. After serving in the Royal Canadian Navy in WW2 on an active base in Newfoundland/Labrador, he continued his involvement in the arts, becoming active in the Montreal Repertory Theatre. The Montreal Rep was home to the beginning of multiple Canadian show business careers including that of the late Christopher Plummer and also William Shatner with whom Bruce remained in contact throughout much of his life. Some years later, Bruce met his wife Rita, an actress at the time, while directing her in a play and their shared love of the arts remained a focus of their life together. Bruce’s career spanned six decades and included leadership of CBC Radio, CBC English language programming and many years as an independent television and film producer and distributor. His son Donovan joined the family business in 1980 and worked with him over the next 14 years before branching off to find a career in Information Technology. Despite having survived in the uncertain world of show business, Bruce’s true gift was communication. He wrote his own contracts and speeches and was sought after by colleagues and friends for his expertise in this area. While not one to focus on regrets, Bruce thought that he could have been an effective corporate lawyer had the choice been available to him when he was younger. Bruce was equally respected for his intelligence, kindness, oratory skills (he was a confident public speaker) and last but not least, his integrity. His parting words to friends and strangers alike were ‘God Bless’. He was also very active in community service and was extremely proud of his election to the role of Chief Barker for Variety the Children’s Charity. Bruce was pre-deceased by his wife Rita Raymond (nee Roy) and his brother Bob Elcox. He is survived by his son Donovan (Nancy Lee Martin), his grand-daughter Gabrielle and his sister Doreen Elcox as well as nieces and nephews on multiple continents. In honour of the excellent care he received as a resident of the Sunnybrook Veterans Centre, donations to the Sunnybrook Foundation in lieu of flowers are appreciated. The family would like to acknowledge the dedication and tireless work of the medical and care teams at Sunnybrook (especially during the Covid pandemic) and in particular thank those individuals who worked closely with Bruce while he was a resident there. https://donate.sunnybrook.ca/tribute

It is with great sadness that we share the news that Bruce Alan Raymond passed away in his sleep on Sunday April 4, 2021. Though suffering from dementia, Bruce was being wonderfully cared for in the Veterans Centre at the Sunnybrook Health... View Obituary & Service Information

The family of Bruce Alan Raymond created this Life Tributes page to make it easy to share your memories.

It is with great sadness that we share the news that Bruce Alan...

Send flowers to the Raymond family.