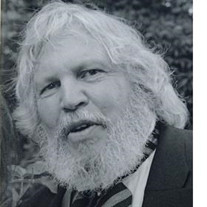 Bryan Diem Mangrum 1938-2018 Professor Bryan Mangrum passed away on Wednesday January 10th 2018 at Mount Sinai Hospital. In his last days he was comforted by many loving messages from old friends and family from around the world. Bryan was born to Lieutenant General Richard C. Mangrum and Virginia Diem. Bryan was with his parents in Pearl Harbour at the time of the attack in 1941.With his military family, Bryan lived all over the States. He attended Swarthmore College, where he met his late wife Ann Hay and her lovely big family, and later Princeton. As a Medievalist in Art History, he accepted a position at McMaster University in Hamilton, Ontario. He also taught at NSCAD University, and at the University of Toronto, where he met his second wife, Marilyn Martin. Bryan was an engaging professor, a scholar who shared his knowledge in an unassuming way, a traveller, a great and generous chef and entertainer, quick witted, funny, kindly, a wonderful neighbour and friend, fond of children and animals, loving husband, father and grandfather, brother and uncle. He leaves behind his wife Marilyn Martin, son Martin Mangrum of Montreal, and daughter Elaine (Rikki Mangrum) Freedberg and son-in-law Michael Freedberg of North Carolina, sister Harriet (Trink Howe) and Jonathon Howe, many nieces and nephews and great nieces and nephews and five grandchildren -Brian, Marty and Kalina Mangrum and Samuel and Max Freedberg and “Little Brother” Carl Baglio , and beloved dog Crouton. He was predeceased by his late wife Ann Mangrum, and son Marcus. He was a resident and fixture in the Harbord Village community of Toronto for decades. His memorial will be held at Bloor Street United Church Toronto on Saturday April 7th at 3pm. Reception to follow. In lieu of flowers donations to The Stephen Lewis Foundation or Doctors without Borders, would be appreciated.

Bryan Diem Mangrum 1938-2018 Professor Bryan Mangrum passed away on Wednesday January 10th 2018 at Mount Sinai Hospital. In his last days he was comforted by many loving messages from old friends and family from around the world. Bryan was... View Obituary & Service Information

The family of Mr. Bryan Diem Mangrum created this Life Tributes page to make it easy to share your memories.

Send flowers to the Mangrum family.