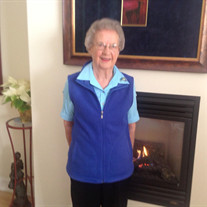 Wallace, Carmilla Mary 1917-2018 It is with great sadness that we announce the passing of Carmilla, on April 16, 2018, at Michael Garron Hospital, Toronto, in her 101st year. Carmilla was born on Dec. 9th, 1917, in Stellarton, NS, just 3 days after The Halifax Explosion. The youngest of three children, she lost her mother to tuberculosis at the age of five and was brought up by relatives. Carmilla was a survivor by instinct and she exhibited a very tenacious spirit throughout her very, long life. She married Russ Wallace in 1947 and moved to Truro, NS . Shortly afterward, they were transferred to Moncton and then to Halifax in 1951. The many years in Halifax were described by Carmilla as the best years of her life. She raised her family in the city and home that she dearly loved. During her many years in NS, Carmilla also enjoyed volunteer work with the Girl Guides of Canada. After the devastating loss of her youngest daughter, Joan, in 2011, Carmilla relocated to Toronto, enabling her to be closer to her daughter, Patricia, and extended family. With loving support, Carmilla was able to reside at the Retirement Suites by the Lake in Toronto, until her hospitalization, just three weeks prior to her death. Carmilla is predeceased by her beloved husband, Russell (1998), baby daughter, Heather Anne (1948) and her youngest and dearly missed daughter, Joan (2011). She is also predeceased by siblings, Clarence (Hood) and Elizabeth (Park). Carmilla is survived by her daughter, Patricia (Wallace), dedicated son-in-law Pat (Salvatore) and grandchildren, Kathryn (Salvatore Van Wart) and Robert (Salvatore), as well as by great-grandchildren, Luca and Siena Van Wart and grandson-in-law, Mark Van Wart. She is survived by step-siblings, Jean (MacLeod) and Bradford (Hood). Carmilla was a devoted member of St. Phillips Anglican Church in Halifax for over fifty years. During her years in Toronto, Carmilla found comfort and support through the outreach ministry of St. Nicholas Church. Thank you to Rev. Canon Janet Read-Hockin and her team. The family would like to thank the wonderful Palliative Group at MGH for their compassionate care. Also, thank you to Dr. Paul Chan for his care and counsel over the years. Thank you also to the caring staff at RSBL. As per her wishes, there will be no funeral. A graveside service and burial of ashes will take place at Christ Anglican Church, Stellarton, NS, on Monday, April 23rd. Those wishing to remember Carmilla may do so by donating to Michael Garron Hospital, Palliative Care Unit, CNIB or charity of their choice. No flowers, please.

The family of Carmilla Mary Wallace created this Life Tributes page to make it easy to share your memories.

It is with great sadness that...

Send flowers to the Wallace family.