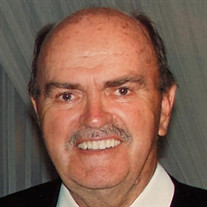 CHARLES LORNE RICHARDS February 28, 1936 - January 1, 2021 We are deeply saddened to announce the passing of Charlie peacefully at his home in Scarborough on January 1st, 2021 at the age of 84. Devoted husband to Doreen (Smith) of 62 years and loving father of sons Christopher, Gregory (late Nichole), Philip (Ada) and precious grandchildren Joy, Jonathan, Daniel, Nathaniel, Nathan, Trinity & Justice. He is survived by brothers John, Don (Marilyn) and sister Lorraine Proud (Art), sister-in-laws Marilyn Richards, Helen Smith, brother-in-laws Lloyd Smith (Vi), Bob McKessock, George Moore, as well as Uncle to many Nieces and Nephews. Predeceased by In-laws, Norman & Ferna Smith, daughter-in-law Nichole, sisters Beth Cornett and Dorothy Richards, brother-in-laws John Cornett, Len Sweiger, Gord Stade, Jackie & Ray Smith and sister-in-laws Irene Stade, Jean Moore, Shirley Smith, Mary McKessock, and Doris Smith. Charlie was born in Tara, Ontario to the late Lorne & Florence Richards. After graduation he moved to Toronto where he worked driving transport at Imperial Oil and Labatt Brewery until his retirement. He was a member of the Masonic Lodge and also The Rameses Shriner's where he was especially proud to have the privilege to drive many needy kids to and from doctor appointments at the Shriners Children Hospitals in Montreal and Erie, Pa. A very special thank you to the wonderful PSW's (Ben & Bev) and Palliative Care (Dr. Sandra Marcus and her team) who looked after Charlie so well during his illness. We could not have gotten along without you. Due to the Covid situation, a private family service will be held on Sunday Jan. 10th at 1:00 p.m. In lieu of flowers, please consider a donation in Charlie's name to the Shriners Childrens Hospital in Montreal (www.shrinershospitalforchildren.org/montreal)

CHARLES LORNE RICHARDS February 28, 1936 - January 1, 2021 We are deeply saddened to announce the passing of Charlie peacefully at his home in Scarborough on January 1st, 2021 at the age of 84. Devoted husband to Doreen (Smith) of 62 years... View Obituary & Service Information

The family of Charles Lorne Richards created this Life Tributes page to make it easy to share your memories.

Send flowers to the Richards family.