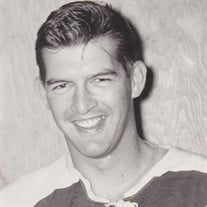 CHARLES ALBERT “BERT” RUSSELL, B.Com (Hons.), CGA, CMA, CPA June 24, 1934 - Oct. 29, 2020, age 86 Bert was born in Brampton, Ontario, the son of Charles and Dorothy (née Jennings) Russell (both deceased), and attended Brampton Central Public and High Schools. He participated in several sports, winning many school, city and Ontario provincial championships. Bert was most proficient in Lacrosse, playing several years for the Brampton Excelsiors and Long Branch Monarchs Lacrosse Clubs, twice winning the Minto Cup (Canadian Junior Championship), and competing for the Mann Cup (Canadian Senior Championship) on three occasions. After graduating from high school, Bert was employed at Gummed Papers Ltd., and earned his CMA degree through evening studies. In 1963, he accepted a position at Northern Electric’s Brampton Division, where he was promoted to management while obtaining a CGA designation. In 1965, he accepted a transfer to Montréal, progressing through several locations and positions including Superintendent of Accounting, Division Controller and Director of Treasury. In Montréal, Bert earned an Honours Bachelor of Commerce at Concordia University, and also became a proficient skier. It was also in Montréal that he met his wife Astrid Horster, and his children Kim and Marc were born. Returning to Brampton in 1978, he continued with Nortel until his retirement in 1995 with 32 years of service. Bert played tennis for many years at the Regency, Bramalea, and Brampton Tennis Clubs winning his share of trophies and medals. He also enjoyed working on his basketball shot and golf swing, travelling, and his annual month spent in Florida. Bert was a member of PROBUS (RCL Branch 609), a member of The Royal Canadian Legion, and lifetime member of the Brampton Excelsiors Lacrosse Club. In 2017, Bert was inducted into the Ontario Lacrosse Hall of Fame for his outstanding achievement in the sport. Bert is survived by his much-loved children, Kim and Marc, his ex-wife Astrid, sister Donna Grogan, and several cousins. Bert would like to thank his very best friend, Irene Suitters, for her love and support, and her family for their kindness and friendship over the last many years. He would also like to thank the many people who contributed to his successful and enjoyable lifetime. In lieu of flowers, donations can be made to William Osler Health System Foundation https://oslerfoundation.akaraisin.com/ui/donation

The family of Charles Albert "Bert" Russell created this Life Tributes page to make it easy to share your memories.

Send flowers to the Russell family.