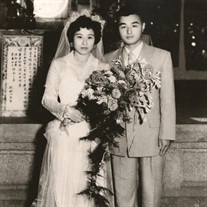 Our beloved mother and grandmother, Mrs. Chih-hui Wang Hsieh, passed away in the early morning hours on Friday, January 28th, 2022. She leaves behind 3 children, David, Jane, and Eugene, and 5 grandchildren, Stephen, Alex, Sarah, Mianna, and Kai. In 1965, Chih-hui bravely left her home and teaching career in Taiwan with young David and Jane in tow, to join their father Dr. Pei-chih Hsieh in Regina, Saskatchewan as he began his professorial career at the University of Regina. Youngest son, Eugene, arrived a few years later. Chih-hui turned her many talents towards the family and held down the fort when Pei-chih was away with his academic pursuits. With the help of her new friends and neighbours in Regina, she transformed her backyard into a bountiful vegetable garden, and over time became one of the local neighbourhood gardening experts. She also applied her cooking, sewing, and cultural talents to spearhead the Chinese Pavilion at Mosaic, a successful annual multicultural event in Regina. After pursuing a fine arts degree, she became a well known local potter, especially for her intricate animal-themed Chinese teapots and traditional Chinese steam cookware. Later on, she also nurtured grandson Stephen while his parents pursued careers in Beijing, China. After Pei-chih passed away in 1997, Chih-hui stayed for another ten years in Regina before moving to Ontario to be closer to Jane, Eugene, and her grandchildren. While in Ontario, she was able to pursue her love of art, gardening, and cooking, much to the benefit of her extended family. In lieu of flowers, please consider a donation to the Arthritis Society ( arthritis.ca ) or other charitable organization of your choice.

The family of Chih-hui Wang Hsieh created this Life Tributes page to make it easy to share your memories.