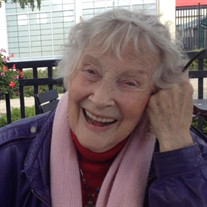 August 4, 1926 – November 29, 2020. The family of Doreen Baran is saddened to announce her passing on November 29, 2020. Doreen has joined the angels and has been reunited with her family who have passed before her. Doreen will be lovingly remembered by her sister Sandy (Bob McLachlan), sons Edward (Barbara) and Dave (Jeannie), grandchildren Roger (Ashley), Britney (Joe) and Will. Doreen was very proud to tell everyone that she had a great-granddaughter Stella. Doreen was such a special person, who cared about everyone, was funny and had a great sense of humour, wore her emotions on her sleeve and wanted others to know how much she cared. Doreen was always an optimist and focused on making her future bigger than her past. Doreen was born in Toronto and lived in a small house on Steeles Avenue. Her parents, Bill and Helen Race, eventually bought Hickory Lodge Resort in 1945 located in Rockport, Ontario, on the St Lawrence River. They later moved to Collingwood where Doreen’s father bought a Chrysler Car Dealership which he named Race Motor Sales. While living in Collingwood, Doreen met her future husband Ed at a barn dance north of Toronto. They had two sons, Edward and David while living in Collingwood. The family, in time, moved to Scarborough where the boys went to school. Unfortunately, years later, the marriage ended and for the rest of her life Doreen lived on her own. Eventually Doreen found her true passion as a real estate agent working in the Toronto area. Doreen’s motto was “Because I Care”. She lived her life caring for others. She loved her work so much that she was still actively selling homes in her eighty eighth year. We have been told that, “Doreen contributed so much to our office through her amazing work ethic, charm, caring, and volunteering to help others anytime. She was always smiling and had such a "glint" in her eye.” Doreen always said, “Love what you are doing and you will never have to work a day in your life”. When Doreen was in her early eighties, she volunteered for a number of years at The Warehouse which was part of the Salvation Army. Doreen was instrumental in securing a new 4000 square foot building for The Warehouse when they were forced to relocate. We have been informed that, “Her impact on our work in the inner city, to help those in need, was significant and long lasting.” Doreen never stopped learning, be it through workshops on how to be a better real estate agent or learning about healthy eating and living. Doreen will be remembered for her devotion to God. She attended Willowdale Baptist Church for approximately forty years. She enjoyed being part of her Church and participating in their special events. She loved her sister, sons and extended family and would always talk to those around her about her family. Doreen also had many wonderful friends and colleagues throughout her long life. We extend special thanks to the wonderful staff of Cheltenham Care Community. Your kind and compassionate care was greatly appreciated. She was a Great Lady!

August 4, 1926 &#8211; November 29, 2020. The family of Doreen Baran is saddened to announce her passing on November 29, 2020. Doreen has joined the angels and has been reunited with her family who have passed before her. Doreen will be lovingly... View Obituary & Service Information

The family of Doreen Violet Baran (nee Race) created this Life Tributes page to make it easy to share your memories.

The family of Doreen Baran...