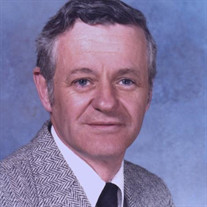 Douglas Henry Hogg, born April 26, 1932 - Nov. 22, 2018 Devoted husband, father, friend, and dog-lover. Known for his grace and good humour, even after the stroke that claimed much of his eyesight in 2017, he just couldn’t conquer heart disease that slowly restricted him to a wheelchair in the last months and ultimately claimed his life. He died peacefully at home surrounded by love. Friends and family knew him as a giver and peace-maker, and he gave much. In his early years, Doug sold shoes part-time, taught public school, and travelled over two hours to U of T to further his career and become a school principal, all the while supporting two young daughters and his stay-at-home wife. He retired in 1983 as Principal of Uxbridge Public School, previously in Blackstock, Oshawa, and Whitby. In 1967 he was elected President of the Ontario Riding Young Progressive Conservatives, and remained actively involved throughout his life. After retirement he enjoyed winters in Florida with his wife, Diane, living in Port Perry & Niagara Falls, and in his last days in Toronto, close to where he was born. Always quick to share a joke, long before the ease of the internet, he loved meeting people and going places. Volunteering continuously, he could always be counted on for his family, whether it be renos, house moving, painting rooms, or road trips with his daughter and son-in-law, he’d be there while totally devoted in supporting his wife in all ways – for 58 years. He will be so very much missed by his daughters, Cyndy Jamieson, and Tracy Karen Hogg, son-in-law, Don Jamieson, and much loved grandchildren, Tyler & Alex Jamieson, Shawna Hogg, and Jeff Greene, plus his very spoiled Chorkie, Zoe. Preceded in death by his wife, Diane Hogg (nee Santer), parents Margaret Kathleen Hogg (nee McNab) & Joseph Alexander Hogg, and his brothers, Earl, Robert, Allan, & Bill Hogg. At his request, he was cremated without a formal service. Donations in his memory would be gratefully appreciated at Hotel Dieu Shaver, St. Catherines, for the outstanding professional care given to him there, or the Heart & Stroke Foundation, especially the Tavi Fund. At the family’s request, please join in remembering him online, share your own memories on his Legacy Facebook page at: https://www.facebook.com/groups/DougHoggRemembered/

Douglas Henry Hogg, born April 26, 1932 - Nov. 22, 2018 Devoted husband, father, friend, and dog-lover. Known for his grace and good humour, even after the stroke that claimed much of his eyesight in 2017, he just couldn&#8217;t conquer heart... View Obituary & Service Information

The family of Douglas Henry Hogg created this Life Tributes page to make it easy to share your memories.

Send flowers to the Hogg family.