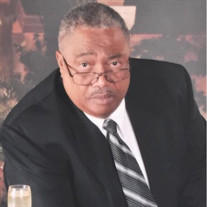 Live Audio Broadcast: To accommodate those desiring to attend, but not able to, you may listen to the ceremony live using this link: http://mixlr.com/dmaloney/ View the special presentation from Doug’s family: https://giovanna-okereke.wistia.com/medias/ubwb3xa95z Douglas Maloney was born in Georgetown, Guyana on December 10th, 1947 to Lionel Maloney (deceased) and Idaline Bell (deceased). He was the 2nd of Idaline’s three sons, and he is survived by Leslie Williams (Janet) and Michael Maloney (Ruth), and other half brothers and sisters. In 1969 he married Patricia Isaacs and moved to Canada with their five children in 1980. On Sunday, May 20th, 2018 he fell asleep in death in Brampton, Ontario. Doug leaves behind to mourn his loss, his beloved and devoted wife Patricia and their five children, their spouses and five grandchildren, Romona Okereke (Godwin), Wayne Maloney (Nicole), Beverley Maloney, Karen Leonard (Justin), and Roger Maloney; five grandchildren, Christian Maloney, Giovanna Okereke, Nikkita Clarke-Banks, Josiah Okereke and Nyla Maloney as well as one great-grandson, Jarrell. Doug also leaves behind his Aunts Roslyn Millington and Rosetta Semple and a host of cousins, nieces, and nephews. Douglas was a loving and devoted husband who shared in many renovation projects with Patricia. They were an unstoppable team who loved to dance and travel together. As a busy father of five children, he always spent quality time with his children; whether it was bike riding, a day at the beach (or lake) when they were young, or taking time to teach them many skills, including renovating their own homes or repairing their cars as adults. He was always there as a very protective and loving father. To his friends, he was a generous and helpful person and everyone who knew him can always count on Doug’s support. In 1986 Douglas symbolized his dedication to God in baptism as one of Jehovah’s Witnesses. He had come to learn of Jehovah’s purpose for the earth and the condition of the dead. Over the years, Doug has had many opportunities to strengthen his faith in the resurrection hope based solidly on the ransom sacrifice of Jesus Christ. This hope is recorded in the Bible at John 5:28 “Do not be amazed at this, for the hour is coming in which all those in the memorial tombs will hear his voice and come out.” Although he has left a void in the hearts of his loved ones, the hope of seeing Douglas again sustains many with the ability to live in a world free from sickness and death forever as promised at Ps 37:29 and Rev 21:4. If you would like to make a donation, we are an advent supporter of https://www.jw.org, a worldwide charity that is teaching people about the Bible and the hope for mankind: https://bit.ly/2kjTuF6

Live Audio Broadcast: To accommodate those desiring to attend, but not able to, you may listen to the ceremony live using this link: http://mixlr.com/dmaloney/ View the special presentation from Doug&#8217;s family: https://giovanna-okereke.wistia.com/medias/ubwb3xa95z Douglas... View Obituary & Service Information

The family of Douglas Maloney created this Life Tributes page to make it easy to share your memories.

Live Audio Broadcast:
To accommodate those desiring to attend,...

Send flowers to the Maloney family.