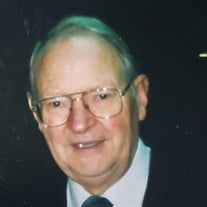 Eberhard Fritjof Olsen, born May 23, 1930 of Stetten, Remstal, Germany to Isak Olsen and Emma Doster. Eberhard fell asleep in death, peacefully at Faith Manor Long-Term Care Home in Brampton, Ontario, on May 9, 2020. Eberhard is survived by his wife Eva Koch Olsen, his daughters Elke Olsen Berthault (George) and E. Olsen. Grandchildren Jeremy Olsen (Cyndi) and Heidi Cyrenne Tessier (Philippe) and their great grandchildren Aric, Kai, Gage, Keefe and Aidan. As well as numerous siblings and their extended families. Eberhard grew up in Korntal, Germany where he was one of five children. He lived in the schoolhouse where his father worked. As a young man, he apprenticed in the upholstery trade, learning from his grandfather. This became his official profession that he took much pride in. He was well known for his craftmanship. On his father’s death bed, he met a lovely volunteer nurse by the name of Eva Koch. His father was their matchmaker and told Eberhard that Eva would be a good one for him. Eberhard and Eva were married in 1954, in Germany. Soon after, they gave birth to their first daughter Elke. Elke was only 7 months old when they immigrated by ship to Canada. They arrived in Lambeth, Ontario. Eberhard and Eva soon moved and started their new life in the Greater Toronto Area, where they soon had a second daughter. Many other family members from Germany later joined them in Ontario. Eberhard was baptized as one of Jehovah’s Witnesses in 1958 and Eva soon followed. Together they volunteered many hours teaching the bible to many people. Eberhard and Eva moved to Quebec in 1973 to answer a call to ‘preach where the need was great’. They found their new life in the little town of Morin-Heights, Quebec. They made many good friends over the years, and are well known throughout the area, both for their bible teaching and Eberhard’s upholstery skills. Eberhard had a small workshop where he worked out of the back of his house. Eberhard and Eva would split their time between family, his work and their ministry. In 2009, due to failing health, they made the move to Wendover, Ontario to live nearby their granddaughter, Heidi. Due to occasional changes in their long-term care needs and requirements, Eberhard and Eva enjoyed making many friends while residing in various care facilities; Beacon Heights Retirement in Orleans (2011), Evergreen Retirement home in Mississauga (2015) and finally to Faith Manor in Brampton in 2017. Eberhard and Eva celebrated their 65th Wedding Anniversary this past year. In their spare time, they were known to sit sweetly beside one another, often playing games in the activity room for hours with the other residents. They never gave up their ministry, preaching to anyone that would listen. Eberhard was strong, dedicated and committed right to the end of his life. We are saddened by his passing, a great loss to all who knew him. He will be greatly missed by all that knew him. We await the day that he will return to us in perfect health, stronger than ever in paradise. Eberhard Olsen 1930-2020

The family of Eberhard Olsen created this Life Tributes page to make it easy to share your memories.

Send flowers to the Olsen family.