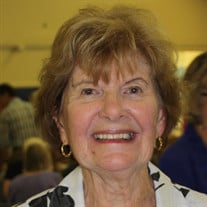 SMITH (SHARP), EDNA April 7, 1930– October 23, 2020 It is with immense love and sadness, but also with many happy memories, that we say goodbye to Edna Smith (nee Sharp) – a wonderful mum, grammy, great-grammy, and friend. Edna was pre-deceased in February of this year by her husband Leslie of almost 70 years. Born in England in 1930, Edna married Leslie Smith in 1950, and soon after immigrated to Canada. They lived in Scarborough (Eastville Ave. and Banmoor Blvd.) where she and Les raised their three sons. Edna was a kind, open and generous person who cared greatly about everyone. She spent many happy hours with her children and grandchildren, embraced extended family members, and created many enduring friendships. As part of an avid tennis family, Edna enjoyed attending tennis matches with friends, and cheering on her favourite players on TV, especially Pete Sampras and Roger Federer. Edna retired from her career as a secretary in 1995; she and Les then moved to Peterborough with a great deal of excitement for that next chapter of their lives, which included travelling extensively. Always impeccably dressed, Edna had fun participating in fashion shows and clothes shopping with her girlfriends. Whenever there was dancing music, Edna was ready to kick up her heels, either with Les or with her fellow line dancers. Edna also devoted many hours to volunteering at a local retirement home, where she visited with her therapy dog, Gemma. After moving to Royal Gardens Retirement Residence in Peterborough in 2011 with Les, Edna could be found walking her dog, attending fitness classes, hosting scrabble games, and enjoying the flowers and birds at her doorstep. For the past few years, dementia slowed her down considerably and, ultimately, ended her life, the last 9 months being spent at True Davidson Acres in Toronto. Special thanks to nurse Yan for the excellent care of Edna and ongoing communication with our family regarding her health. She will be greatly missed by her sons Andrew (Rosanne), Philip (Katherine),and Christopher (Amanda),grandchildren Kristen (Darryl), Alyson, Lauren (Curt), Stephen, and Jacqueline, and 2 great grandchildren (Nora and Lilly). No service will take place at this time due to Covid.

The family of Edna Smith nee Sharp created this Life Tributes page to make it easy to share your memories.