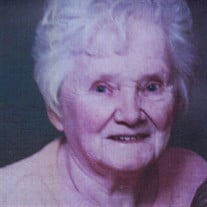 She will live In Our Hearts Forever Elisabeth (Lies) Snoeck passed away peacefully in her sleep at Grace Hospital on April 20 2018, at the age of 95. She will be greatly missed by all her family, the beloved wife of Peter Snoeck (deceased), loving mother to Elly St. Denis (deceased), Johanna Snoeck, and Henny Wiley, grandmother of Peter St. Denis, Andrew St Denis, and Matthew Wiley, great grandmother of Brandon St. Denis, Breanna St.Denis and Roland St.Denis. She will be greatly missed by sisters Nan Vink, Jo Noyons, and Tonnie Jansen, as well as brother Herman van Hooff. She was also loved by many nieces, nephews and cousins. Elisabeth Jansje Snoeck van Hooff was born in Rotterdam, Holland on June 11 1922. After the early death of her mother, she spent a number of years living with her grandmother. At the age of 14, she left school and became responsible for her father's household. Her grandmother lived a few houses down the street and she often joked that for a long time they ate the same meals as her grandmother. At that time food was sold at the front door, by many vendors who sold their wares from a cart. As they came to her door, she would ask what her grandmother was having, and buy the same thing. She would then go to her grandmother and ask how to prepare it. She did end up a very good cook. After her first marriage, which produced a child during the war years, she was married to Petrus Hendrikus Mattheus Snoeck on March 3, 1948. During the next 11 years she had two more children, and lived a happy family oriented life. At about that time rumors of international strife and fear of a possible war starting made her husband decide that a move was necessary, and the family emigrated to Canada. They had an introduction to English, and a large wooden box to put all their possessions in. A ten day journey by boat, and a lot of sea sickness brought them to Quebec on May 30,1959, and a train brought them to Toronto, where a 'normal' life began again. English was a major problem, although she had learned some, it was by no means enough. She always said that she learned English from watching I Love Lucy, and The Three Stooges on tv. She never let it stop her though, even though it took a clerk quite a bit of time to convince her that the pair of pants on sale, was really only the one pant she was after, not two. Life was again normal, with a few hardships, and visits to Holland here and there. In later life, she had some troubles with arthritis, and her heart, but managed the occasional trip out to a restaurant. She remained at home until the day before her death.

She will live In Our Hearts Forever Elisabeth (Lies) Snoeck passed away peacefully in her sleep at Grace Hospital on April 20 2018, at the age of 95. She will be greatly missed by all her family, the beloved wife... View Obituary & Service Information

The family of Elisabeth Jansje Snoeck created this Life Tributes page to make it easy to share your memories.

She will live In Our Hearts Forever

Send flowers to the Snoeck family.