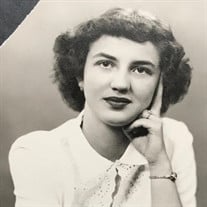 ELIZABETH KOVRIG August 7th 1933 - August 2nd 2021 Just 5 days shy of her 88th birthday, and 5 days before the 1st anniversary of her husband’s death, Elizabeth Kovrig passed away at the Houses of Providence on Monday August 2nd, 2021 with her daughters by her side. Elizabeth was born on August 7th 1933 in Fairground Ontario. Her mother and namesake Elizabeth Prokator emigrated from Hungary with her husband Frank Prokator and had two sons – Frank and Steve. The Prokators liked helping fellow Hungarian immigrants by renting out rooms in their home. Elizabeth senior’s Hungarian cooking was legendary and she fed them well. One of those boarders was a kind man named Steve Molnar and that’s how Elizabeth junior came into the world. A little scandal never hurt anybody. In spite of having too many Franks, Steves and Elizabeths in the family, Liz persevered through the confusion and blossomed into a beautiful and frisky teenager. She may have grown up on a farm in Guelph, but Liz wasn’t much of a farm girl. She spent her weekends flirting with boys at Hungarian dance halls and that’s how she met her future husband Frank (of course) at the tender age of 16. As soon as Liz turned 19, she and Frank married and enjoyed life together. They kept going to the dance halls, went to movies and shows, and had a lot of friends. Liz worked at Wilco and then at local pharmacies but she never focused on a career outside of the home because she was planning a career inside the home as a homemaker and mother. Despite their best efforts, a baby never came. They found out Frank had a low sperm count, but he had many other qualities so the good times continued. Liz was a proud woman and did her best at everything. At Christmas she shopped for 20-30 nieces and nephews on both sides of their family and her presents were renowned amongst the kids. Eventually though, shopping for other people’s kids just wasn’t enough. Liz was ready to settle down and focus on her career, so she decided to adopt. Most of her friends and family thought Liz was crazy since she was pushing 40 (gasp!) but Liz didn’t give a damn what they thought. She and Frank adopted 2 girls - Becky and Brenda. Although the partying may have slowed down with 2 daughters to raise, it certainly didn’t slow down much. Becky and Brenda remember many nights with strange and sometimes unqualified babysitters as their parents continued having a good time. Liz kept her house perfect and her hair even more perfect – and if it wasn’t, she rocked the kerchief like no other. Her perms were as legendary as her mother’s cooking. Outside of the Hungarian recipes she got from Elizabeth senior, Liz’s cooking was not legendary, but you can’t have it all. Liz was no shrinking violet, she was a social butterfly. In fact, the butterfly was her favorite image. She had butterfly tchotchkes all over her house, a butterfly tattoo on her ankle (thanks to an aspiring tattoo artist friend of her daughters) and she even had a butterfly engraved on her pre-ordered gravestone. When Becky and Brenda became teenagers, they wanted to throw some parties of their own, and although Liz took great pride in her perfect house, she made a deal with her daughters. If they helped pay for her and Frank to have a weekend away using their hard-earned part-time job money, they could have an under-aged house party. As a bonus, Frank would buy them the booze, and if the house remained spotless, they might be allowed to have more. Her daughters never let her down, and the police were called only twice. Liz may have been a perfectionist, but she wasn’t judgemental. Her daughter's friends were from all different cultures and fashion senses – jock, funk, metalhead, nerd, new wave, goth and punk. To Liz, a mohawk was just another hairstyle that took as long as hers to set, so she showed them all respect. When the girls moved out to start lives of their own, Liz crumbled. But it didn’t take long for her to find a new focus - doting even more on the family’s beloved dog Kasper, and the ‘senior life’. Because Liz was so on top of everything, she made sure she and Frank downsized, a few times, until they finally settled into an apartment in Barrie. It was there that they really shined – showing all the geezers at the seniors centres how to kick it on the dance floor. Not to mention acing it at shuffleboard, euchre and darts. Thanks to their son in laws Dave and Stefan, Liz and Frank adored their three grandchildren – Nathan, Jessica and Elsa. Eventually had to move into a shared room in a nursing home when they couldn’t dance anymore. After Frank passed away, Liz tried to stay strong, but after almost 69 years of marriage, she decided she was ready to see him again. She and Frank are deeply missed by their daughters. Frank provided for them and gave them tons of laughs. Liz took care of pretty much everything and made them the women they are today. Losing their parents is a profound and heartbreaking loss, but they like to imagine that somewhere on the other side, Liz is enjoying a cold beer and then a polka, a waltz, and a slow tango while Frank sings gently in her ear. Liz’s 'Celebration of Life' will be held on Saturday September 18th, from 11:30am to 1:30pm under the red roof pavilion at Riverside Park in Guelph. If you have any questions, feel free to contact her daughter Brenda at [email protected]

ELIZABETH KOVRIG August 7th 1933 - August 2nd 2021 Just 5 days shy of her 88th birthday, and 5 days before the 1st anniversary of her husband&#8217;s death, Elizabeth Kovrig passed away at the Houses of Providence on Monday August 2nd, 2021... View Obituary & Service Information

The family of Elizabeth Kovrig created this Life Tributes page to make it easy to share your memories.

Send flowers to the Kovrig family.