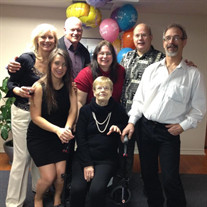 Feb 8, 1932 – April 29, 2020 Elpida died peacefully at Michael Garron Hospital Toronto, finally free from pain with her eldest daughter by her side. It was not Covid but due to Covid restrictions, the rest of her loving children could not be with her. Elpida (née Apostolakos) was born in Sparta, Greece, her late parents Yanni Apostolakosand Evgenia Apostolakos (née Anastasopoulou). She was a determined fighter from birth - born with pneumonia (pre penicillin) and given little chance of survival, she fought through the fever to grow up with her beloved older sisters Dora Risou (94) and Litsa(Evangelia) v.Kalckreuth (deceased). She and her family survived the occupation of Greece during WW2 and the aftermath of an attempted Communist takeover. Elpida graduated with degrees in Journalism and Archaeology at the University of Athens. In pursuit of her Archaeology degree she went to a dig in Italy and brought back one of the first Vespas to Athens, leading to merry a chase with police. Elpida came to Canada in 1955 to write articles for an Athenian newspaper about her adventures in a strange, foreign country. To learn English, she worked as a waitress at her cousin’s restaurant in Saint John, New Brunswick. It was there she met and married her late husband, Duart Oke McLean. They had 2 children in Saint John - Evgenia McLean (Ed Flanigan) followed a year later by Bill McLean (Cathy Ledden), moved to Toronto where they had John McLean (Trish). From there they moved to Raleigh, NC and then Palo Alto CA where D. Christian McLean (Kathryn Baker) was born and finally moved back to Toronto where Elizabeth (Paul) was the last queen for their full house.She imbued her treasured children with her feistiness as well as a love of reading, history, cooking for family and all things Greek (think ‘My Big Fat Greek Wedding’). Elpida will be greatly missed by her granddaughter Chelsae Petrovic (Cody), great-granddaughter Danika Petrovic (Clareshome, Alberta); step-grandchildren Jeff, Rob & Kristy Baker, step-great-grandson Ashtyn Petrovic; niece Annette Tabbara (née v.Kalckreuth) and her children Justus &Karlin (Berlin, Germany); nephew George Zolotos (husband of the late Désirée Zolotos née v.Kalckreuth) and their children Michalis & Danae (Athens, Greece), as well as the many friends she made over the years. After Elpida’s divorce, she learned new skills and worked in Data Operations first at Inglis and then at Aetna Insurance. When Elpida quit smoking she started to walk, spending many years walking from her apartment on Balliol to work at King and York and exploring Toronto’s many neighbourhoods and walking trails. At retirement Elpida moved to her much loved condo in the Distillery and lived independently until a fall forced her to move to assisted-living in April 2019. She had many friends in the Distillery, they went to AquaFit together for many years followed by Scrabble at a nearby restaurant. After infirmity stopped her attending AquaFit classes, she met her friends twice a week to play Scrabble. It was the highlight of her week. Elpida is now at peace, free from pain – in spirit back in Greece. She will be greatly missed. A Celebration of Life will be held when circumstances allow. In lieu of flowers, please donate to the Rheumatoid Arthritis Society of Canada or the charity of your choice.

Feb 8, 1932 &#8211; April 29, 2020 Elpida died peacefully at Michael Garron Hospital Toronto, finally free from pain with her eldest daughter by her side. It was not Covid but due to Covid restrictions, the rest of her loving children could... View Obituary & Service Information

The family of Elpida McLean created this Life Tributes page to make it easy to share your memories.

Send flowers to the McLean family.