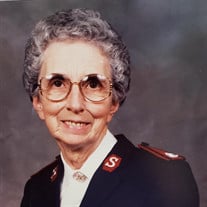 Major Emily Elizabeth Clarke died on April 19, at the age of 98, after a very brief illness. Emily was born on October 22, 1921 in Kipawa, Quebec, the eldest of 4 siblings. She grew up in a lakeside log cabin without electricity or running water. Her father died when she was 16. To survive, she had to begin working shortly afterwards. While holding down a full-time job, she completed a Bachelor of Arts at Sir George Williams University (now Concordia University) at a time when few women obtained a degree. She joined the Salvation Army and became an officer, ultimately attaining the rank of Major. She went to Newfoundland as a teacher, and in 1956 was transferred to Africa,where she served as a teacher, principal,and administrator. She spent a total of22 years in Africa, in Congo, Rhodesia, Nigeria, and Kenya. During her service there she faced many challenges, obstacles, and dangerous times. Her steely determination and fierce independence were valuable assets on many occasions. She retired as an officer in 1979. Emily was also a very kind and generous person. Though not rich in this world’s material wealth, she freely gave of her own goods, energy, and time to others. She often showed tenderness and compassion, whether to a small baby with cancer fighting for his life, a young boy living in poverty, or an old man living out his last days in a hospital bed. Her years as a teacher of boys in Africa had a profound effect on many lives, and her influence on them went far beyond the impartation of knowledge in academic subjects. Eternity alone will reveal the fruits of her dedication and selflessness. Even as she got older, she found ways to help and serve others. This included volunteering for many years at Scarborough Grace hospital.Her mind remained sharp right to the end, and until recently, she maintained a remarkable degree of independence despite blindness from macular degeneration and encroaching frailty. Emily is pre-deceased by her younger brother Bruce. She is survived by 2 younger sisters, Dorothy (Clark-Donovan) and Geraldine (Riegert), brother-in-law Reynold Riegert, 3 nephews (Danny and David Riegert, Andrew Clark), 3 nieces (Maureen Halsted, Gloria Browne, and Cynthia Clark), 8 grand-nieces and nephews, and 8 great grand-nieces and nephews. We are grateful to the staff at Sts. Peter and Paul Residence, Scarborough, for the untiring care provided to Emily during the past 15 months. Donations in her memory can be made to the Salvation Army. https://salvationarmy.ca/donations/donate-online/

Major Emily Elizabeth Clarke died on April 19, at the age of 98, after a very brief illness. Emily was born on October 22, 1921 in Kipawa, Quebec, the eldest of 4 siblings. She grew up in a lakeside log cabin without electricity or running water.... View Obituary & Service Information

The family of Emily Elizabeth Clarke created this Life Tributes page to make it easy to share your memories.

Major Emily Elizabeth Clarke died on April 19, at the age of...