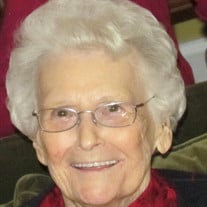 Fleurette Hayes passed away peacefully on May 12th, 2019 at the age of 95, one month shy of her 96th birthday Fleurette was born on June 10th, 1923 in L'Orignal Ontario, to Aldona Emery and William Berniquez. She was the 11th child of 13 (5 brothers and 7 sisters). As a child, enjoyed winter sports (skating, skiing and tobogganing) with her siblings and friends. At age 18, Fleurette moved to Brownsburg, Quebec to help with the WW2 war effort as an inspector in a munitions factory. She was one of over 260,000 women across Canada who eventually joined the workforce in the munition industry. In Brownsburg, she enjoyed her job, independence and making new friends. It was here that she also met Morley Hayes who was a machinist hired by the factory. He asked her to a show and they started dating. They got married on December 22, 1943 when Fleurette was 20 years old. Their son Gord was born in 1944. Morley, who was serving in the navy after working in Brownsburg, was stationed in Halifax until he returned to Toronto in 1945. Fleurette and Morley enjoyed many happy years in the north end of Toronto and at Balsam Lake where Morley’s mother bought property and built a cottage. Their daughter Dianne was born in 1950. In 1957 the family moved to Streetsviille and remain there until 1969. Many close friendships were established during those years with neighbours and the United Church community. After being a stay at home mom for close to 18 years, she re-ented the workforce after taking courses in typing and bookkeeping. Fleuette was actively involved in teaching Sunday school and volunteered as an Explorer leader. She loved being around young people. In 1972 Fleurette lost her son Gord to cancer. It was a very difficult time in her life. Her strength and courage allowed her to overcome her grief and concentrate on what mattered most, her family. In 1980 and 1982 Fleurette was blessed with two grandchildren, Matthew and Adam. She enjoyed taking care of them and spoiling them whenever she could. She would take them to Blue Jay games, the Exhibition every summer in Toronto and to the cottage on Balsam Lake. Fleurette had many interests and talents. She was an avid bridge player and made many friends through this interest. She taught herself to sew and made clothes for Dianne and her friends in high school. Fleurette was quite an antique enthusiast and with her sister-in-law Marg, got into collecting, refinishing and even reupholstering furniture. Fleurette was always interested in learning new skills. She was a great quilter, and in her 50s decided she needed to learn how to make stained glass. One of her lifelong skills was knitting. She took great joy in making sweaters scarves, hats and mitts for her grandchildren, great-grandchildren and children of her friends. Fleurette was quite the sports enthusiast, following golf, basketball, baseball and tennis. She definitely had her favourite players and her opinions on how they could improve their game. She had an adventurous spirt and loved going up to her cottage, exploring farmers markets in the countryside and travelling to England, Austria, Italy, Jamaica and Hawaii. After retirement, many years were spent in their mobile home in Florida. In her 90th year Fleurette welcomed her first great grandchild, Elliot. Just 3 years later her second, Etta. She adored playing with them and would often be found crawling around the floor building castles, driving trains and cars, or simply letting them climb on her. They always looked forward to spending time with 'nana'. Fleurette had a huge heart, a great sense of humour and always put others first. She will be deeply missed by her family and friends. A celebration of Fleurette’s life will be held at Delmanor Northtown at 5351 Yonge Street on Thursday May 30 at 3:00. In lieu of flowers, donation can be made to “West Neighbourhood House” https://www.canadahelps.org/en/charities/west-neighbourhood-house/

Fleurette Hayes passed away peacefully on May 12th, 2019 at the age of 95, one month shy of her 96th birthday Fleurette was born on June 10th, 1923 in L'Orignal Ontario, to Aldona Emery and William Berniquez. She was the 11th child of 13... View Obituary & Service Information

The family of Fleurette Hayes created this Life Tributes page to make it easy to share your memories.

Send flowers to the Hayes family.