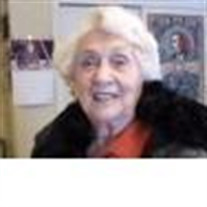 Born In: Carbonear, Newfoundland and Labrador, Canada Born: October 10th, 1926 Passed in: Toronto, Ontario, Canada Passed on: December 16th, 2017 FLORA LOUISE JOY (née PIKE) October 10, 1926 - December 16, 2017 It is with sadness that we announce the passing of Flora Joy, at age 91. She died peacefully, surrounded by family, at True Davidson Acres in Toronto, after a long illness during which her family, friends and caregivers were impressed again and again by her resilience and life force. The family extends heartfelt thanks to the kind staff of True Davidson Acres. She is predeceased by her husband Clifton Joy and her brother James (Eileen); survived by her children John (Robin), Robert (Henry), David, and Debora (Misha); her sisters Frances (Starr) and Margaret (Brown); her brothers Henry (Frances) and Roy (Eileen); her sister-in-law Eileen Pike; her grandchildren Ruby, Sara, Reba, Emma and Nikolas; and many loving and beloved nephews and nieces, on both the Joy and Pike sides of the family. Born in Carbonear, Newfoundland, Flora studied nursing at the General Hospital in St. John’s. Before she graduated, her father James and her mother Margaret (Powell) passed away, leaving Flora as head of the family. She married Dr. Clifton Joy in 1949. Over the ensuing years, Clifton and Flora’s home often sheltered not only their children, but also Flora’s siblings, and Clifton’s nephews and nieces. Flora worked tirelessly alongside Clifton for the establishment of Newfoundland and Labrador’s first and only pediatric hospital, the Janeway Children’s Health and Rehabilitation Centre. She was a hostess extraordinaire, whether throwing legendary garden parties, cocktail parties, New Year’s Eve gatherings, bridge parties for her beloved bridge friends, or elegant Sunday dinners, where visiting dignitaries, interns, residents, relatives and family friends were always welcome. Interment will take place at St. John’s Norway Cemetery, 256 Kingston Road, Toronto, on Friday, December 22 at 1pm. A memorial gathering in Flora’s honour will be held in Toronto at True Davidson Acres, 200 Dawes Road, on Saturday December 23 at 3pm, followed by a reception from 6pm - 9pm at her daughter Debora’s home ([email protected]). Another gathering will be held in her beloved St. John’s, Newfoundland at a future date. In lieu of flowers, donations may be made to the Janeway Children’s Hospital Foundation (http://www.janewayfoundation.nf.ca) or to a charity of your choice.

The family of Mrs. Flora Louise Joy(nee Pike) created this Life Tributes page to make it easy to share your memories.