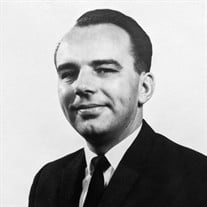 FRANK KOVRIG October 30th 1929 - August 7th 2020. At the ripe old age of 90, Frank Kovrig passed away at the Toronto East General hospital on Friday, August 7th 2020 with his two daughters by his side. Frank grew up in Raymond Alberta with his siblings Jolayne and Steve and Hungarian immigrant parents Joseph and Elizabeth, so he could polka with the best of them. His family eventually moved to Brantford Ontario, and as Frank blossomed into a young man, he became a regular troublemaker at all the Hungarian dance halls. In 1949, Frank met a beautiful young girl named Liz at a Valentine’s dance. She lived in Guelph, so Frank would travel there on weekends to be with her. During the weekdays he worked long, hard hours in the tobacco fields, but the photo he kept of Liz tucked away in his wallet gave him the motivation to keep going. Frank wrote Liz weekly love letters, signing them with the pet name she had given him: “Snooky.” Frank married Liz as soon as she turned 18 (it seems too young these days, but it was normal back then). They polka’d together for many years, but were never able to get pregnant. Fortunately, they had a good time trying. Eventually they decided to adopt and Frank wanted daughters. When he was 39 years old, Frank became a parent to his first daughter Becky and then to Brenda at the age of 41 (it seemed too old back then, but it’s normal these days). Frank taught his daughters how to polka so he could have two more dance partners at the Hungarian dance halls. Frank worked in Human Resources for his whole career. He started work in Kitchener, then Brantford, and finally in Brampton Ontario, but it wasn’t just fun and games at the office. Although he was well liked by his friends and family, he was also a tough negotiator against multiple unions - so tough that he once received a bomb threat on his home that forced his wife and daughters to evacuate. Frank kept his cool and he kept his charm, eventually winning over that union as well. He was definitely a character – a gentle soul and a trickster. Frank always liked to say “frankly” and he was known for his bad jokes. Oh, the bad jokes were plentiful, and frankly, a lot of them were dirty. His dad jokes were even worse. Frank, his wife and his daughters made up a biologically diverse family. Both Frank and Liz were raised by men who were not their biological fathers, so their daughter Brenda liked to call the Kovrigs "a family of bastards" and Frank thought that was just fine. He sang the famous polka song “Roll out the Barrel” far too many times for his daughters to count, but he never learned to play the accordion. The banjo was Frank’s instrument of choice, so in a fit of teenage rebellion his daughter Becky took up the accordion instead. Although he may not have honoured his roots with his instrument, Frank was true to his Hungarian spirit by teaching his daughters (and the younger generations in his family) as many Hungarian swear words as he could. When he retired at 65 while living in Tecumseth Ontario, instead of putting his feet up and taking it easy, Frank focussed on fulfilling his lifelong dream of working as a used car salesman. No one knows why. Becky and Brenda met Dave and Stefan, who helped give Frank and Liz three grandchildren to dote on in their senior years – Nathan, Jessica, and Elsa. Frank and Liz downsized into an apartment in Barrie and they enjoyed kicking the asses of many old geezers at the local seniors centre with their ace dart game. Eventually they had to move into a nursing home in Scarborough, but they didn’t lose their competitive spirit. Their bingo game was strong, so the collection of winning tissue boxes stacked up in their shared room. Confined to a wheelchair for the last few years and in a lot of pain, Frank struggled. He couldn’t walk, and he could barely see or hear a damn thing, but the man never lost his sense of humour or his big, warm smile. On September 1st, Frank would have celebrated 69 years of marriage with Liz. We can only hope that somewhere polka music is blasting and he’s giving dance lessons to anyone interested - while waiting, very patiently, for his sweetheart to join him in the big Hungarian dancehall on the other side. A celebration of life (including polka music) will be held at a future date. To be notified, email his daughter Brenda at [email protected]

FRANK KOVRIG October 30th 1929 - August 7th 2020. At the ripe old age of 90, Frank Kovrig passed away at the Toronto East General hospital on Friday, August 7th 2020 with his two daughters by his side. Frank grew up in Raymond Alberta with... View Obituary & Service Information

The family of Frank Alex Kovrig created this Life Tributes page to make it easy to share your memories.

Send flowers to the Kovrig family.