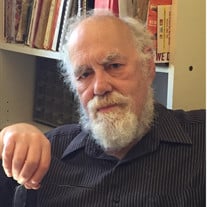 FRASER SUTHERLAND Poet. At Toronto March 28, 2021. Born Pictou N. S. December 5, 1946. Son of the late Russell and Mary (MacHardy) Sutherland. Predeceased by his son, Malcolm (2009) and wife Alison (2018). Survived by his brother William Sutherland, brother-in-law Robert Armour, and sisters-in-law Pauline Strunk, Rosemary Armour, and Liza Vandermeer, and nephews and nieces Martin and Nora Strunk, Becca and Joe Domovitch, and Nel, Molly, and Adriaan Vandermeer. After graduating in journalism from Carleton University in 1969 Fraser had a rich career as a writer, editor, lexicographer, and poet. He lived for periods in Montreal, British Columbia, Scotland, Portugal, and China. His numerous books of poetry include Strange Ironies, Fiddlehead Poetry Books, 1972, Jonestown, McClelland & Stewart, 1996, and Bad Habits, Mosaic Press, 2019. A wonderfully loyal friend, he will be missed by a multitude from Guangzhou to Sarajevo. Donations in Fraser’s memory may be made to PEN Canada, in support of the Writers in Exile Program, pencanada.ca, or Community Living Toronto, in support of the Supported Independent Living Program, communitylivingtoronto.ca. Family and friends will gather to remember him later in the year.

The family of Fraser Sutherland created this Life Tributes page to make it easy to share your memories.

Send flowers to the Sutherland family.