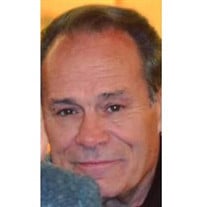 Frederick "Fred" Arthur Groves Fred passed away peacefully with his family by his side on Wednesday July 10, 2019 at the age of 74 after a short battle with cancer. He will be greatly missed by his 3 children: Sherri Groves (Dan), Brandi Groves-Roberts ( Mathew ) grandsons Jackson and Cole, and Adine Cooper all of Ontario; 10 siblings: Butch (Gail) of AB, Neil (Jennifer) of AB, Bertha of AB, Alison of AB, Catherine (Ralph) of BC, Dora of BC, Larry of AB, Morris of AB, Maria of AB, Loretta of AB, and many neices and nephews. Fred was predeceased by his parents: Neil Groves and Loretta Kinsella, and his 3 brothers: Matthew, Sidney and James. Fred was born February 28, 1945 in New Waterford, NS, and moved to Sudbury, Ontario with his family in 1955 when he was 10 years old. He then moved to Toronto, Ontario in 1962 at the age of 17. Fred worked as a logger, crane operator, helped build first 362 miles of track for subway, but most of his life he was a mechanic and welder. He met Jackie in 1972 and they had their first daughter Sherri in 1974 and then their second daughter Brandi in 1976. Fred was very artistic, both on paper and in welding he could make something beautiful from nothing...like his garden butterflies. Later in life he met Carol and had another daughter Adine. When Fred was 64 he became a grandpa for the first time when his daughter Brandi had a son Jackson John Roberts, then a few years later Cole Frederick Roberts was born. They were his pride and joy! Although Fred will be missed..he will live in our hearts forever. A Celebration of Life will be held on Sunday July 21 from 3-7 pm at the Royal Canadian Legion MacKenzie Branch 414 60 Legion Court Road Woodbridge, Ontario L4L 2B4 Main intersection is highway 7 and Islington Ave. 1 block south of Highway 7-behind the Beer store

Frederick "Fred" Arthur Groves Fred passed away peacefully with his family by his side on Wednesday July 10, 2019 at the age of 74 after a short battle with cancer. He will be greatly missed by his 3 children: Sherri Groves (Dan), Brandi Groves-Roberts... View Obituary & Service Information

The family of Frederick Arthur Groves created this Life Tributes page to make it easy to share your memories.

Fred passed away peacefully with...

Send flowers to the Groves family.