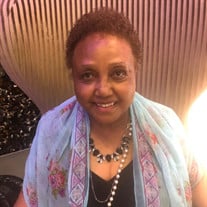 Georgia Katherine Simone Boyd (nee Modesty) December 10, 1939 - March 27, 2020 It is with great sadness that we announce the passing of Georgia Boyd of Toronto Ontario. Survived by her ever-loving husband, best friend and supporter of 41 years Enzo Simone, sons Randall Jason Fox, Eron Boyd, step-daughter Stephanie MacKay, and grandchildren Ashley Daniel Foot and Maya Occhionero Boyd. “G,” as she’s lovingly known, was born in Toronto, Ontario. Beginning her life in the rough and tumble Kensington Market and west end of Toronto, Georgia was a hard charging go-getter. She first married Len Fox, and had her first son, Randall and then married jazz legend Lenny Boyd and had another son, Eron. At this time there was a great shift for equality and cultural rights and Georgia became associated with Jesse Jackson and the PUSH organisation and was part of many social actions. For Georgia, arts & media was her whole career—and she was on the Dean’s list at Seneca University studying radio & television arts. She was also a talented visual artist and clothing designer with a dress shop in hippie Yorkville in the late 60’s. Among her many cultural achievements, she founded one of the first Canadian Black theatre companies, Stirring Spoon Theatre; and, later authored a children’s book on a slave escaping to Canada, Anne Marie Weems, which is still being used in the school system today. She also published The Black Dial Directory—making her a true pioneer of Toronto’s Black community. She also created an anthology of black music from the African diaspora to more contemporary music called Music is the Message, that she presented to schools in concert form with slides and live musicians; she also wrote an original musical called Million Dollar Babe for which she also wrote her original songs. Later, Georgia met the love of her life Enzo Simone, they became best friends and have remained steadfastly in love for the past 41 years! Georgia & Enzo loved music immensely and blues music really touched Georgia’s soul. She was also proud to call artists such as James Cotton and Matt “Guitar” Murphy friends. Georgia’s signature song was the folk blues standard “C.C. Rider, and “Summertime” which was a party favourite. Let choirs of angels sing thee to thy rest. Memorial to be held in the future.

Georgia Katherine Simone Boyd (nee Modesty) December 10, 1939 - March 27, 2020 It is with great sadness that we announce the passing of Georgia Boyd of Toronto Ontario. Survived by her ever-loving husband, best friend and supporter of 41 years... View Obituary & Service Information

The family of Georgia Katherine Simone Boyd created this Life Tributes page to make it easy to share your memories.

Send flowers to the Boyd family.