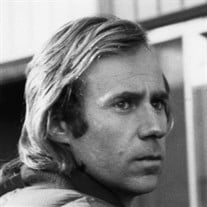 January 17, 1946 - March 23, 2020 One of Canada’s pioneering and most celebrated film directors, Giles Walker died March 23 in Toronto after a 10-year battle with brain cancer. Born in Scotland in 1946, Giles began his career in 1974 as a documentary filmmaker with the National Film Board of Canada in Montreal. He soon made the switch to dramas, and his Bravery in the Field earned him an Academy Award nomination for Best Live Action Short Film in 1979. He went on to win many Genie and Gemini awards over his 40-year career in Canadian film and television. In the early 1980s, he led an innovative trend to low-budget feature films, which drew on spontaneous performances by non-professional actors. Most notable was the comedy 90 Days (1985), a tongue-in-cheek story of the misadventures of two single men and their search for modern love. Giles was the son of novelist and former Black Watch Major David Harry Walker and Montreal native Willa Magee, herself a writer who had served as Wing Commander of the Canadian Women’s Air Force. They settled in the small town of St. Andrews-by-the-Sea, New Brunswick, where Giles and his three younger brothers grew up playing pond hockey and sailing the St. Croix river. Giles came to film in a roundabout way. He failed his fifth year of Engineering studies at McGill, largely because he devoted most of his time to his role as president of his fraternity house. His parents compelled him to pursue a make-up degree in Psychology at the University of New Brunswick, where he kindled a love of cinema. That led him to a Master’s degree in Film Studies at Stanford University in California, which served as a springboard for his success. Tragically, his first wife, Imogen, died of cancer, foretelling his own illness years later, and giving him the sensitivity to direct an acclaimed film, Princes in Exile (1990), about a summer camp for young cancer patients, all searching for love, social acceptance and recovery. With second wife Hannele Halm, a Finnish-born documentary film editor, he had two children, Anna-Kaisa, a writer, and Sam, a lawyer. Giles was an attentive and doting father, delighting in his offspring’s accomplishments and nudging them forward, as well as making them laugh—his well-planned April Fool’s jokes were the stuff of legend in the family. Ever the organizer and gatherer of people, he was the master link in a sprawling, multi-generational clan that travelled from all over the world to spend summers in St. Andrews. Giles was happiest at the helm of the annual “lobster boil,” a family beach bonfire featuring lobsters cooked in sea water, per Maritime tradition. His love for young and old alike and his teasing sense of humour brought everyone into the fun. His network of friends in the film industry grew huge over many projects, including the feature drama Ordinary Magic (1993), the television series Emily of New Moon (1998-2000), Il Duce Canadese (2004) and René Lévesque (2006), and the documentary The Way of Tai Chi (2011). Diagnosed with a brain tumour in 2010, he often stubbornly refused to accept his limitations. He threw himself into writing a compelling and courageous book, Wake Me in the Morning, about his experience of terrifying abuse by a teacher at Bishop’s College School in the late 1950s. He traveled across Canada and the Caribbean to meet with other Old Boys and listen to stories many had never told anyone before. As his health gradually declined in his later years, he sometimes lost touch with reality, but, ever the filmmaker at heart, was at times convinced he was working on a new project. “Get me to the train station, the crew’s waiting, goddamnit!” he once commanded a longtime friend. Even on his worst days, he always seemed to have a film he needed to be working on, a family gathering to plan, or a friend he had to see. Giles was steadfastly cared for by Hannele, whose unwavering devotion carried the family through his many years of illness. He also received outstanding care from the staff of Suomi-Koti nursing home in Toronto, Saint Margaret’s Residence in Montreal, and his oncology team at the Royal Victoria Hospital, headed by Dr. Gizelle Popradi. Giles is survived by Hannele, their daughter Anna-Kaisa (Matt Morrow and their daughter Julia) and son Sam (Anna Dare, and their son Matias); and by his brothers, David (Diane), their children Jordan (Rachel Lee), Erica Conklin, Zoe (Davy Dhillon), Josh Conklin (Jessica), and Riley; and Julian (Caroline), and their children Matthew (Katherine Sawatsky), Meg (Brandon Schaufele); brother-in-law John Dean, as well as many grand-nephews, grand-nieces and cousins throughout the family. Giles was predeceased by his father and mother, David and Willa Walker, his brothers Barclay and Patrick, his first wife Imogen Dean, and his nephew, David A.M. Walker. In lieu of flowers, the family would greatly appreciate donations to the Giles Walker Memorial Scholarship in Film Studies now established at the University of New Brunswick (via www.unb.ca/giving or c/o Development & Donor Relations, University of New Brunswick, P.O. Box 4400, Fredericton, NB E3B 5A3) or toward research at the Brain Tumour Foundation of Canada, www.braintumour.ca. Due the ongoing pandemic, plans for a memorial service have unfortunately been postponed. The family hopes you can remember Giles in your own way, and will announce a date for a gathering when circumstances allow it. If you wish to see some of his work, his early films are available for free streaming at NFB.ca. Free copies of Giles’ book, Wake Me in the Morning, can be obtained by sending an e-mail to [email protected]

The family of Giles Walker created this Life Tributes page to make it easy to share your memories.

One of Canada’s pioneering...

Send flowers to the Walker family.