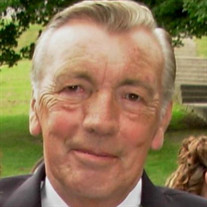 Father. Brother. Uncle. Cousin. Friend. Computing Pioneer. Bridge Player. Proud Grandpa. “He is such a nice man,” “Such a gentleman,” “So kind and thoughtful.” These sentences always come up whenever Gwyn Morgan’s name is mentioned. His quiet decency seemed to be what people noticed first about him. Gwyn was born in May 1940, the first child on his family’s dairy farm in the small village of Resolven, South Wales. He had memories, as a very young child, of hiding in the dark under the kitchen table with his mother during the rare bombing raids reaching Wales in WWII, and later being part of VE day celebrations on his street in 1945. He was the eldest of five children, and grew up simultaneously helping on the farm (Pentwyn) and going to school. Sometime after moving from home and starting a mathematics degree at Swansea University, he came across an ad looking for people excelling at math for a new career in “computers.” It intrigued him, and soon (early 1960s) he moved to London to work in the computing divisions of Ford and Honeywell – the dawn of UK computing. He also worked for Honeywell in Paris, France, before being recruited in 1967 to another Honeywell job and settling in Toronto, Canada. From there he programmed room-sized mainframes using the Easytran language and punch cards, attended Expo 67, and developed a lifelong interest in hockey (which joined the English Premiere League, F1, and rugby in his heart) as he watched the Leafs win the Stanley Cup that year. He soon married another Honeywell employee (Sandra Johnson) and started a family, and a few years later daughter Julia and then son Brian were born. Both have fond memories of their dad from the 1970s, such as when he would bring home a table-top sized “computer” at night for the family to connect (via dial phone) to a computer at work for a game of checkers, card playing and board game nights, and their time together on yearly family visits to Centerville and the Toronto Islands. In the 1980s, Gwyn’s marriage ended, and when Bull’s (which had acquired Honeywell) computer division shut down, he continued to work as an IT project manager at Gescou, Bell Sygma and CGI where he was a friend and mentor to many. Gwyn began playing duplicate bridge in the 1980s; he played at Kate Buckman’s Bridge Studio, Partners Bridge Club and the Toronto Bridge Club over many years. Through the pandemic, he kept playing online almost daily, and was sent his Silver Life Master certificate in July 2021 (an achievement he told no one about, quite typically). His other passions were music (opera, chamber, and traditional jazz), reading (science, math, physics & history), visiting the St. Lawrence Market (he was a Saturday fixture for decades) and walking through the Don Valley and his beloved Danforth neighbourhood, where he lived the last 25 years. Also Monty Python (his favourite Python being John Cleese). In 2011, one last great passion came into his life: Kurt Morgan (Brian’s son). Kurt and his grandpa shared a special bond; nothing lit up Gwyn’s face quite like his grandson. He is deeply missed by Julia, Brian, and Kurt, siblings and in-laws Hugh (Pat), Clive (Marcia), and Carmen (Steve); Linda, Gary, Kathleen, and the rest of his cousins in the UK; nieces and nephews Angharad, Delyth, Branwen, Gethin, Gareth, Evan, Huw, and Ceri; Margaret, Meryl, Joseph and Leyre, June, and many others in our extended family. He is also missed by many friends – especially longtime friend Joan, along with Gerald and Paula, Frank, and John C. Gwyn was loved by others who have left us, including his brother John, parents Ivor and Molly, friend Margaret Cherry, and his uncle Arthur and aunt Paula. Special thanks to James W., Lorraine and the many health professionals who have supported Gwyn over the years. Gwyn died on September 19, 2021, very peacefully, together with loved ones and music. A Celebration of Life with video option will take place at a later date. If you would like to attend, please let family know or email [email protected] In lieu of flowers, donations to causes Gwyn often supported are appreciated: the Yonge Street Mission www.ysm.ca (the issues of homelessness and hunger weighed heavily on him) or Parkinson Canada www.parkinson.ca. Tributes to Gwyn on this site are most welcome and appreciated.

The family of Gwyn Wellstead Morgan created this Life Tributes page to make it easy to share your memories.