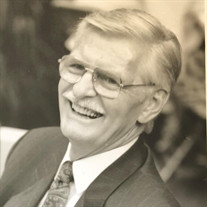 Captain (Ret’d) RCAF/CAF It is with profound sadness that we announce the passing of our father H Lewis (“Lew”) Edwards on September 4, 2021 at the age of 90 years following a prolonged battle with dementia. He was a man who will be remembered as having lived a full, loving and generous life. Born in Arrowwood, Alberta to Harold Justin and Etta Hazel (nee Suitor), he has left us to join his parents, sister Helen Pearl (1980), wives Velma Irene (1978) and Ann (2014), and his beloved daughter Lu-Anne (“Lou”) (2018). He will be greatly missed by two sons Rick (Cindy) and Chris (Maureen), grandchildren Karly, Byron, Kyle, Cullen, Garret, Kristen, Cameron and Spencer, great-grandchildren Lola, Cohen, Emily, and Levi. Not to be forgotten is son-in-law Ron Hunchuk. Dad proudly served his country for 32 years as a member of the Royal Canadian Air Force (later the CAF), and following retirement continued to serve in a similar capacity for the Public Service. He had fond memories of growing up in and around Calgary, and of having spent a summers on his uncle Floyd’s farm in Vulcan County, Alberta. He met the love of his life, Velma Irene (Nee Wood) and married her in 1953. Together they raised a loving family and enjoyed many adventures together during his many postings throughout Canada and Europe (Germany, France and Holland). He loved music, and was always happy “making noise” on his clarinet and saxophone, while also enjoying the talents of more accomplished players during frequent get-togethers with family and friends. Following retirement, he fell in love with sailing, and with three of his closest friends, (Bob Roy, Neil Bush, and Kevin Dean) they set sail on two separate boats for a year of wonderful adventure all the way from Gananoque, Ontario, down to the Caribbean Sea. He was a loving and generous man who was always quick to give of himself without complaint, and without expectation of anything in return. This became readily apparent as he selflessly transitioned into the challenging role as primary caregiver during the lengthy illnesses of both of his wives. He will be remembered always, but greatly missed by those whose lives he touched. Special thanks to the nurses and staff at Hillsdale Terraces in Oshawa for the compassion, care and comfort they provided Dad. A private graveside ceremony will be held at a later date.

Captain (Ret&#8217;d) RCAF/CAF It is with profound sadness that we announce the passing of our father H Lewis (&#8220;Lew&#8221;) Edwards on September 4, 2021 at the age of 90 years following a prolonged battle with dementia. He was a man who... View Obituary & Service Information

The family of Harold Lewis Edwards (Lew) created this Life Tributes page to make it easy to share your memories.

It is with profound sadness that we...