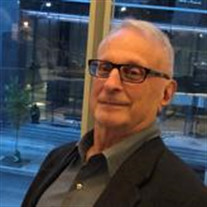 October 13, 1937 - November 22, 2019 Born in Toronto, Ontario, Canada. After a short illness Harry Pasternak passed away peacefully at Kensington Hospice in Toronto surrounded by his loving family. He is pre-deceased by his parents, Carl and Nellie, as well as siblings Albert and Esther and sister and brother-in-laws Bev and Mort. He is survived by his five children: Daniel, Beth, Mark, Susan, and Natasha and his beloved grandchildren: Trace, Jade, Hannah, Chloe, Xavier and Didier. He is survived by his brothers: Leonard, Morris and Ron as well as many nieces and nephews. Harry is also survived by Carol and Suzanne, the mothers to his children. Harry was an all-round athlete and played football at Vaughan Road Collegiate. In addition, he was quarterback of the Varsity Blues team while attending the University of Toronto where he obtained a degree in Physical Education and Health. Harry had a wide variety of interests and this translated into many career pursuits including being a teacher at Humber College, an entrepreneur, the founder and director of the Thousand Island institute and the Co-Creator of Airt - Air Structures & Design. Harry was a guest speaker at many venues throughout Canada, and a consultant at the Ontario Housing Corporation where he oversaw structural housing remediation in indigenous communities. Harry was very passionate about causes concerning Canada’s indigenous people and approached this work with an unwavering passion. Harry was endearingly known by his family as Captain Spadina. He had a passion for basketball and loved the Syracuse Orangemen. He was an accomplished salsa dancer and in retirement became a member of a local social dance group. His return to salsa dancing after a stroke this past summer led to a quick and complete recovery. We are grateful to his aides who took such good care of him, even making it possible for him to leave his condo to enjoy a full night of dancing on occasion. In fact despite his illness Harry was spotted dancing as recently as few weeks ago. He cherished his friendships with his salsa group and although there are too many to name, they know who they are. Harry and his family are also indebted to the members of the security team at the Riviera Condominiums on Queens Quay for their help and support. The family is grateful to Kensington Hospice for their loving care of our father, grandfather, brother, and uncle. There will be a celebration of Harry’s life this coming Spring. Details will be forthcoming in the months to come. In lieu of flowers the family would appreciate a donation to Kensington Hospice, 38 Major Street, Toronto, Ontario, kensingtonhealth.org or David L. Macintosh Sport Medicine Clinic at [email protected] “The person who never made a mistake, never tried anything new”

October 13, 1937 - November 22, 2019 Born in Toronto, Ontario, Canada. After a short illness Harry Pasternak passed away peacefully at Kensington Hospice in Toronto surrounded by his loving family. He is pre-deceased by his parents, Carl... View Obituary & Service Information

The family of Harry Pasternak created this Life Tributes page to make it easy to share your memories.

Send flowers to the Pasternak family.