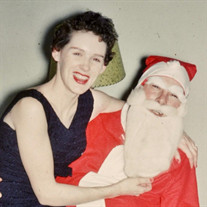 Helen Elizabeth DiGiacomo (Nee Bastien) October 17, 1934 – July 5, 2021 Helen Elizabeth DiGiacomo passed peacefully at home on July 5, 2021 after a long illness. Helen is survived by siblings Robert and Janet, children Carla, Marla, Andrew, Todd and Francine and her many grandchildren and one great grandchild. It is hard to imagine an infant named Helen; it is such a mature name. But in the case of our Mother, Helen Elizabeth Bastien, it was an apt name, Thrust at an early age into the role of mothering her siblings, whom she adored and lovingly cared for, never complaining. Even after she had married our Father, her siblings continued to live with our family, and eventually her Mother, Ellen lived with us. Growing up in Cabbagetown the friendships formed were tight and everlasting. Our Mothers best friends were the McLaughlin sisters. The McLaughlin family provided a safe and loving haven where Helen could be a child. Of the four sisters, her best friend was Ellen, the tiniest and mightiest of the group. The bond with the McLaughlin's has lasted their lifetimes. Helen loved music and dancing. She grew up in a musical family. Her three brothers were musicians and she was too, the Hawaiian guitar her instrument. Those traditions remained with her always. Childhood kitchen parties were the norm in our house. Her brothers and our Italian uncles dazzled us with their talents and endless repertoire. Our father, who wasn’t a musician, made himself a washtub bass, which he pulled out at every party and played until his fingers bled. Those parties often ended with a fry up at dawn. With the onset of Alzheimer’s, Helen's pleasures were simple. She enjoyed time spent with her daughters Carla and Marla. Her love of music continued to bring her great joy. Even in the late stages of the disease the lyrics to songs by her favourite artists, Fats Domino and Patsy Cline still rolled easily off her tongue. Her illness robbed her of her beautiful voice but not her passion for belting out a tune. So powerful was her connection to music that even in the later stages of the disease she learned the lyrics to songs by her new favourite artists, Rufus Wainwright, kd Lang and Amy Winehouse. Helen was happiest outdoors immersed in nature. She loved visiting the gardens of Toronto. Rosetta McClain was her favourite. There she spent hours in astonishment of the beauty surrounding her. The squirrels and birds were her friends. Helen had the posture and carriage of royalty it belied her humble beginnings. Her nature was the antithesis of a royal. She was a woman of simple pleasures. Her genuine, compassionate, generous nature will live on in all who she touched. A celebration of life will take place at a yet to be determined date.

The family of Helen Elizabeth DiGiacomo created this Life Tributes page to make it easy to share your memories.