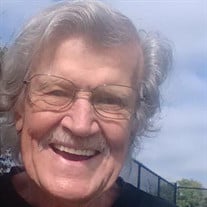 Henry Shearholt Russell (October 15,1930 – July 5, 2018) Sadly, but with the greatest of memories, the family wishes to announce the passing of Henry Russell on Thursday, July 5, 2018 at Lakeridge Health Oshawa. Without a doubt, Henry was a special guy. We will miss the twinkle in his eyes, his endless smile, and his quick wit. Born in Glasgow, Scotland he had a varied career as a butchers’ apprentice, a cook in the officers’ mess of the British army and heavy machine operator in the coal mines. He emigrated to Canada in 1960 to work in the Timmins gold mines. He worked for General Motors in the St. Catharines Foundry, as a supervisor, and retired after 33 years. Henry had boundless energy. Retirement gave him time to follow his passion for gardening in Burketon while honing his tennis skills and going on to win the Ontario Provincial Seniors’ Doubles Championship. He leaves behind his wife of 37 years, Bonnie Bouckley, 3 children by a previous marriage, Sandra Large (Dave), Stuart (Brenda), and Stephen, 8 grandchildren: Chadd, Ryann, Sarah, Lindsay, Scott, Paul, Brittany and Lucas and 7 great grandchildren. Sadly missed by brothers-in-law Brent and Barry (Heather), mother-in-law Joan and his nephew, Isaac and niece, Lea. The family praises and thanks Dr. Woods and the Cancer Centre team, the Kidney Care team and all those at ParaMed, Lakeridge Health ER, Nephrology and Oncology, and Supportive Care who cared for him in his final weeks. Condolences only, are appreciated.

Henry Shearholt Russell (October 15,1930 &#8211; July 5, 2018) Sadly, but with the greatest of memories, the family wishes to announce the passing of Henry Russell on Thursday, July 5, 2018 at Lakeridge Health Oshawa. Without a doubt, Henry... View Obituary & Service Information

The family of Henry Shearholt Russell created this Life Tributes page to make it easy to share your memories.

Send flowers to the Russell family.