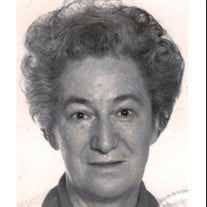 Hildegard Maria Klavins (1929 – 2018) Born March 3, 1929 in Frankenmarkt, Austria, the only daughter of Maria K. Pfeifer and Rudolf Deisenhammer, died peacefully on January 4, 2018 at St. Michael’s Hospital Toronto, Ontario. She has joined her parents, husband and her only brother in their heavenly home. She is survived by her only son Maris along with two grandchildren Natalie and Peter. Hilda’s life was a constant challenge. Due to hardships after the war she immigrated to England where she met her husband Janis and in 1952 they were married. In 1967 Hilda, husband and their only son immigrated to Canada where they finally planted roots. Hilda worked almost 10 years as head cashier for Dominion stores. She was always willing to help her coworkers and customers alike. Anyone who knew Hilda quickly realized how kind and considerate of others she was. She had a passion for knitting and loved hosting family and friends. For many years she was the focal point for holiday gatherings making her much sought after pastries and cakes. In 1977 Hilda suffered a massivestroke paralyzing the right side of her body along with theinability to speak and significant memory loss. For the last half of her life she struggled both physically and emotionally. As time passed her world continued to grow smaller outliving friends and family. She enjoyed the company of other people and making new friends.One of her fondest memories was being able to hold her two grandchildren and watchingas they grew into adults. Hilda experiencedhappiness and extreme hardship to fill two lifetimes. Whatever the circumstances she loved her family dearly and in her own way watched over them to the very end. She has now found peace in her heavenly home, while sad for us only ensures she will be there when it’s our turn to welcome us with her open arms. A celebration of Hilda’s life will take place on Saturday, February 17, at 9:30 a.m., at St. Paschal Baylon Church, 92 Steeles Ave West, Thornhill, Ontario.

The family of Mrs. Hildegard Maria Klavins created this Life Tributes page to make it easy to share your memories.

Send flowers to the Klavins family.