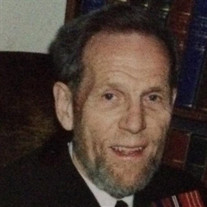 Jack MacQuarrie During a very brief period of palliative care and shortly after celebrating his 95th birthday, Jack passed away on Jan. 10, 2021 at Markham Stouffville Hospital. He will be dearly missed by his son Drew and his loving spouse of 35 years, Joan Andrews. His service in the Royal Canadian Navy, which began during WWII, was one of the most meaningful times in Jack’s life. He had originally joined the Army, but when they refused to allow him to go overseas at age 18, he enlisted in the Navy, which wouldn’t hold him back. A true Renaissance man and longtime resident of Toronto, Jack’s education, versatility and wide range of interests led him to thrive in various professional fields - electrical engineer and diver in the Royal Canadian Navy, aviation radio equipment and computer marketing rep, college and high school educator, musician, computer software trainer and technical writer/journalist. He was a ham radio operator, sailor, avid photographer and had a passion for both visual and performing arts. For many years he played trumpet, trombone, euphonium and/or tuba in various military, community and swing bands. For 15 years he was emcee for the Toronto Parks and Recreation summer music program. He founded and directed the University of Toronto Alumni Band and played in the Toronto Argonauts Band - thrilled to be paid to watch professional football games at a time when marching bands were still hired for half-time shows! Prior to COVID-19 restrictions, Jack was still playing regularly as a 25+ year member in The Newmarket Citizen’s Band, Resa’s Pieces Concert Band and Swing Machine, a Toronto based big band. He was a charter member of the Uxbridge Community Summer Concert Band and played there until last summer. Both before and after moving to the Uxbridge area, Jack served as a board member of various organizations, including the Canadian Band Association, the Naval Club of Toronto and the Uxbridge Scott Historical Society. As a veteran of WWII, he was highly respected and acknowledged, along with his military family at the very active Uxbridge Legion. His gift for story-telling and sharing jokes will be remembered by many friends, former colleagues and band-mates. A celebration of life will be held at a future date, when it is possible to gather together and create live music once again. If desired, memorial donations may be made to the Royal Canadian Legion, Branch 170, 109 Franklin St., Uxbridge, ON L9P 1J5 www.uxbridgelegion.ca or The Naval Club of Toronto, 1910 Gerrard St. East, Toronto, ON M4L 2C1 www.navalcluboftoronto.com.

Jack MacQuarrie During a very brief period of palliative care and shortly after celebrating his 95th birthday, Jack passed away on Jan. 10, 2021 at Markham Stouffville Hospital. He will be dearly missed by his son Drew and his loving spouse... View Obituary & Service Information

The family of Jack MacQuarrie created this Life Tributes page to make it easy to share your memories.

During a very brief period of palliative care...

Send flowers to the MacQuarrie family.