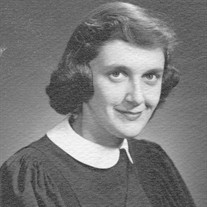 May 31, 1937 - May 8, 2021 It is with heavy hearts that we say goodbye to our mom and grandma, Jacqueline Waldron, who passed away peacefully at home on May 8th, 2021. Jacqueline was predeceased by her soulmate and husband of 60 years, Ron. There is a special bond between soulmates - unconditional love, respect for each other and unique compatibility. The family has comfort in knowing that Jacqueline and Ron have been reunited. Jacqueline will be dearly missed by her four children - Jeff (Denise), Chris (Lisa), Joanne (Dave) and Lesley (Jean-Paul). Many memories of a loving and caring grandmother will be cherished by her 10 grandchildren - Ashleigh, Devon, Ryan, Mitchell, James, Parker, Emily, Alex, Brady and Mackenzie. Jacqueline was born and raised in Brantford ON and often spoke of her fond memories of growing up on Lyons Ave. Jacqueline was the youngest of the three Northover sisters and is predeceased by Barbara Tutt and Audrey McMillan. The sisters shared a very close lifelong bond. Jacqueline often reminisced about trips to the family farm in Palmerston and beach days spent at Long Point, Turkey Point and Port Dover. Jacqueline enjoyed playing sports in her high school years and was competitive in basketball, volleyball and softball. Unforgettable memories were made over the years with close friends Mary, Marg and Liz. Jacqueline graduated from Brantford Collegiate Institute and attended Hamilton Teachers College. She enjoyed teaching elementary school for seven years, before starting her own family. Jacqueline spent her summers as a teenager working at summer camps. She was the Director of the Kiwanis Camp and CGIT Leader at the Grace Presbyterian Church. Jacqueline had a true passion to work with children from a young age. Later in life, she often volunteered to attend school trips and worked as a lunch lady in the winter months, due to missing the interaction with her students. Jacqueline's love of sports continued when she became a mother, and a grandmother. She supported all of her children as they competed: whether she was driving Jeff and Chris to early morning hockey, or cheering all 4 children on at cross country running meets, track and field events and ski races, or giving pointers to Les on the basketball court. Jacqueline also enjoyed watching her grandchildren's hockey games over the past twenty years and she remained an avid NHL fan right up until her final days. She especially enjoyed watching her Toronto Maple Leafs. Jacqueline and Ron purchased a small fishing/family resort in 1970, Forest Hill Lodge on Lovesick Lake in the Kawarthas, and ran it for 48 years. To say that Jacqueline was hardworking is an understatement. She managed the majority of the lodge responsibilities for the first twenty years, while Ron still spent his work week in Toronto. Jacqueline was a jack of all trades - from cooking the meals, filling out the fishing licences, hiring and training the summer staff, to calling BINGO every Wednesday night. Jacqueline enjoyed having her family work at the lodge and also took pleasure in having extended family gatherings there, during which she and Ron could relax and let loose a little. While summers were spent at the lodge, winter activities included snowshoeing and cross-country skiing. Memorable family vacations were taken to Vermont and Quebec. Later in life, Jacqueline and Ron travelled to warm destinations with their siblings and eventually purchased an RV and toured Florida, Arizona and Texas in the colder months. Those who knew Jacqueline, knew that she had a great sense of humour and a quick wit. This trait continued right until her final days and brought her children much joy while caring for her. Jacqueline also had a love of music. She enjoyed singing in choirs in her youth, and frequently had music playing in the house over the years. She would often turn the volume up and dance around the kitchen in Ron's arms. Receiving gifts and giving gifts was never of high importance to Jacqueline. It was the meaningful cards and the celebrations that mattered the most to her. She was happiest when surrounded by those that she loved, and has left her children and grandchildren with wonderful memories and holiday traditions to honour and cherish. Thanksgiving at the lodge was always a favourite to many. At Christmas and on birthdays, she enjoyed having family and close friends crowded around the kitchen table playing cards and board games. Jacqueline's outlook on life was simple - it wasn't what she had in life, but rather who she had in life that mattered. A special thank you to Nurse Joe, PSW Jane and the PSW's from MTMR for the excellent care they provided to Jacqueline. A private family gathering will take place at a later date. Ron and Jacqueline requested that their ashes be scattered together at Lovesick Lake. Do not stand at our grave and weep, we are not there, we do not sleep, we are a thousand winds that blow, we are the diamond glint on snow, we are the sunlight on ripened grain, we are the gentle autumn's rain. Do not stand at our grave and cry, we are not there, we did not die. For those who wish, donations may be made to the Alzheimer's Society at alzheimer.ca.

May 31, 1937 - May 8, 2021 It is with heavy hearts that we say goodbye to our mom and grandma, Jacqueline Waldron, who passed away peacefully at home on May 8th, 2021. Jacqueline was predeceased by her soulmate and husband of 60 years,... View Obituary & Service Information

The family of Jacqueline Emily Waldron (nee Northover) created this Life Tributes page to make it easy to share your memories.


It is with heavy hearts that we...