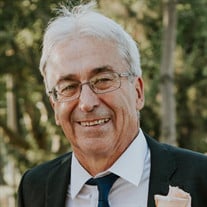 On October 7, 2020, at the age of 70, Jacques Beauvais passed away in his sleep at Toronto Western Hospital after a short battle with pancreatic cancer. Jacques was the loving husband of Cindy Shore and the adoring father of Alexandre (Kate Penney) and Léa (Cory Ruf), of Toronto. Devoted son of the late Ovide Beauvais and Madeleine Brais, brother of Michel, Luc (Carole Hemming), the late Gilles (Marie-Laure Lussier), Alain (Lynda Raymond), the late Mario (Josée Bolduc), Monique (Roch Pelletier), Denis, Lise (François Carrier), Josée (Richard Simard) and dear godfather of his niece, Michelle Lussier Beauvais, all of the province of Quebec. Brother-in-law to Ellen & Myles Waxman of Richmond Hill and Michael & Janet Shore of St. John, New Brunswick. Survived by many nieces and nephews, cousins, and friends. The eldest of 10 children, Jacques was born in Iberville, Quebec, and lived and worked on his father’s dairy farm. He studied Santé publique at the Institut de Technologie Agricole in St-Hyacinthe, Quebec, graduating in 1973. In 1974, he began working for the Borough of North York, later part of the City of Toronto, as an environmental health inspector. In 2005, after retiring from Toronto, he worked for the Region of Waterloo Public Health Unit, and later for the Eastern Ontario Health Unit in Cornwall until he retired again in 2017. He was an active and healthy man who loved running, swimming, cycling, skating, softball, hockey, curling, and in later years, golf. He enjoyed coaching and watching his children play baseball, softball, hockey, volleyball and gymnastics. One of the highlights of every year was his annual bike ride from St-Jean-sur-Richelieu to Bromont and back with many of his brothers, brothers-in-law and nephews. He attended and applauded many of Léa’s performances as a musical theatre artist. He enjoyed music, reading French novels (especially the latest Prix Goncourt winner), attending French movies and theatre performances, listening to and watching Radio Canada, TVA, TV5 and of course, RDS (Réseau des sports). He enjoyed cooking and baking. He travelled as a young man to Guatemala and Mexico, many times to Cuba with his friends, to France, to Florida with his young family, to Norway and Sweden with Alex’s hockey team, explored Ontario, Quebec, and Eastern Canada with Cindy and his kids, and recently enjoyed a memorable tour of Eastern Europe with some of his siblings. He was a wonderful friend to his former colleagues and neighbours, organizing regular coffee or breakfast dates, skating, curling bonspiels and golf. He embodied the French expression “joie de vivre!" He will be greatly missed by all who loved him. Condolences may be left at www.aftercare.org Donations in Jacques’ memory can be sent to: Toronto Playgrounds Baseball (cheques can be made payable to TP Baseball or via etransfer: [email protected] with "Jacques Beauvais" noted in the subject line, Le Centre Francophone du Grand Toronto, (https://centrefranco.org/fr/), or to the Ben and Ida Shore Covenant fund at the Baycrest Foundation, (baycrestfoundation.org)

On October 7, 2020, at the age of 70, Jacques Beauvais passed away in his sleep at Toronto Western Hospital after a short battle with pancreatic cancer. Jacques was the loving husband of Cindy Shore and the adoring father of Alexandre (Kate... View Obituary & Service Information

The family of Jacques Beauvais created this Life Tributes page to make it easy to share your memories.

Send flowers to the Beauvais family.