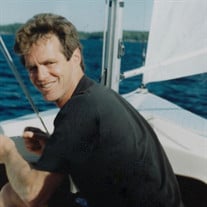 James Bristol Macdonald March 31, 1952 - May 14, 2021 Jim slipped away suddenly in his 69th year leaving his family and friends heartbroken. Jim's life force had always been exuberant, hard to ignore. Much loved by his partner of 40 years Sue Fisher, he was devoted to her and to her family and he really showed his loyalty and compassion over the last few years when she needed his care. He looked after the people that were close to him. His parents A.A. (Bill) Macdonald and Joy Macdonald loved and supported him unconditionally as he started leading an adventurous life at an early age. His love of speed earned him the nickname, “Toad of Toad Hall”, after the Wind in the Willows character. Anything that moved exerted a magnetic appeal: bicycles, cars, motorcycles, sailboats, skis. He loved going fast and was a fearless risk taker, a racer at heart, the ultimate wheelman. His unforgettable smile reflected these passions. Much loved by his older sister Sheila and his younger brother Jock, they spent summers together at the cabin on Lake Wah Wash Kesh. With Griff the family dog as their masthead, they explored the lake in the family sailboat. Jim was a natural and fearless sailor. No wind was too big to tackle. Those early sailing days were always memorable. Once Jock’s son Iain was born, the three Macdonald siblings ritualized an annual week together at the cottage. The goal was to imbue Iain with the Macdonald spirit by including him in ongoing family adventures. Jim and Iain established a special bond during those years. Early school days for Jim were spent at Upper Canada College and then Lawrence Park Collegiate for high school. After finishing school he helped his father start and operate a new company, LabelPlans then took a course in operating heavy equipment which changed the course of his life. He started his career in the NWT where Jock was living and eventually moved to Alberta where he honed his craft as a crane operator, a job he loved and became very good at. Jim and Sue lived in Edmonton for a number of years before returning to Toronto where he continued his career - a career perfectly tailored to his love of dangerous and challenging work. His skills became legendary in the world of cranes. When he retired at 60 he started going to the Mosport Racetrack where amateur drivers could practise their skills on a real racetrack. He took up boxing, a sport he loved. But no matter what was going on in his life he would head north with Sue as soon as the ice disappeared from the Lake. They would stay there until the black flies arrived. Once the summer was over they would go north again and stay until freeze up. Jim always found lots of time to read at the cabin. He was a voracious reader. His love of the north was also profound – an affinity he shared with his father to whom he bore an uncanny physical resemblance. Since the Macdonald family has a long tradition of planting trees, planting a tree in Jim's memory would be a very meaningful tribute.

James Bristol Macdonald March 31, 1952 - May 14, 2021 Jim slipped away suddenly in his 69th year leaving his family and friends heartbroken. Jim's life force had always been exuberant, hard to ignore. Much loved by his partner of 40 years... View Obituary & Service Information

The family of James Macdonald created this Life Tributes page to make it easy to share your memories.

Send flowers to the Macdonald family.