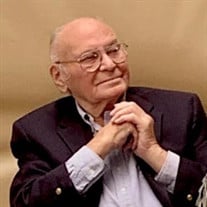 It is with sadness that we share the passing of John (Hans) Kowatsch, at 90 years of age, in Toronto, Ontario. John is predeceased by his first wife, Dorothea (Brown) in 1996 and second wife, Raquel (Garcia) in 2012. He is survived and mourned by his two families: Children Kathryn (Partner - Gordon, Granddaughter- Erin) and Dean (Wife - Kim, Grandchildren - Brianna & Riley), as well as his Step-Children Walter, Silvana (Husband – Jim, Opa to Lauren, Luke & Ryan) and Valeria (Husband - Carmelo, Opa to Raquel & Joseph). The eldest of four children, John was born to parents Theresa and Johann Kowatsch in Germany. A world traveler, John spoke several languages, was well-read and known for regaling friends with stories from his past including, his family’s participation in the German Resistance, his narrow escapes from being captured and his days of playing clarinet and piano in clubs throughout Europe. His travels brought him to North America in the late 1950’s. After living in California, he settled in Toronto where he met and married his wife of 36 years, Dorothea and raised their two children. After the passing of his first wife, John found love again with Raquel Garcia. Together, they enjoyed years of travel, time spent with family and friends at the Hispano Club. John loved his families, books, art, music, and watching the Toronto Blue Jays. Faith was central to John’s life. He attended St. Leonard’s Church where he sang in the choir for more than 40 years. John is also known as a man who loved children, who remember him taking them on fun adventures, reading to them, teaching them to play chess, always having cookies and making the best macaroni and cheese when they came for lunch. Rest in Peace, John Kowatsch. May the Lord Bless and Keep You. Due to COVID and John’s request he did not want to have a formal funeral. The family will reach out later this year about a memorial gathering. In lieu of flowers, we appreciate contributions in “Memory of John Kowatsch” to Covenant House, Ronald McDonald House and/or the Toronto Humane Society.

It is with sadness that we share the passing of John (Hans) Kowatsch, at 90 years of age, in Toronto, Ontario. John is predeceased by his first wife, Dorothea (Brown) in 1996 and second wife, Raquel (Garcia) in 2012. He is survived and mourned... View Obituary & Service Information

The family of John Henry Kowatsch created this Life Tributes page to make it easy to share your memories.

It is with sadness that we share the passing of John (Hans) Kowatsch,...

Send flowers to the Kowatsch family.