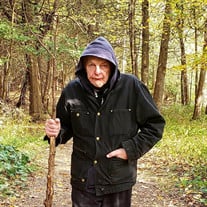 May 11, 1949 -- February 17, 2022 John Alan Scott died peacefully in his studio home. John was a great Soul, a great Friend, a great Teacher, an Artist. He had many friends, family, peers, students, local people, art dealers and patrons, and health care professionals on whom he made an impression. We delighted in his generosity of spirit, wisdom, incredible insights, stories and humour. He was immediately recognizable as one of a kind. Son of Ruth Gallagher and Joseph Scott, John is survived by his siblings, Brian Scott and Sandra Schmedt. Sheri Margetson, Paul Schmedt, Terri Schmedt and Michi Medley adored their uncle, as he did them. Abraham Waddington called him Nano. Early on Kathy Jackson helped him to conceive of himself as an artist. He had many deep and important romantic attachments and celebrated marriage to Deborah Waddington. Generating was John's way of being. He was able to hold the great and the frail in his vision simultaneously, overturn and invert histories current and past, and then articulate in paint, graphite, blood, collage, and installation thrilling new possibilities. In art, his myriad of issue never lingered long. Some fell apart, many were trampled, and most were seized by viewers and incorporated between the eyes. John was a beloved teacher at the Ontario College of Art and Design University He saw through artifice and the trivial and knew how to elevate the strengths in a student. To his colleagues he brought chaos, humility and insight. He was a great listener and loyal friend. In life, John believed in independence and freedom while always holding a flame for those who had no access to power. John had an affinity for the transgender community and gave generously to many causes including OCADU, Casey House Hospice, and Medecins sans Frontieres. He won numerous awards including the Governor General’s Awards in Visual and Media Arts and the Toronto Arts Foundation Visual Arts Award. He was represented by Nicholas Metivier Gallery. He had two animal creatures who dwelt in his heart: Hoichi the Dog, and Mr. Rat. He bore his numerous physical challenges stoically and with humour. John quipped, "If there is reincarnation, I'd like to take a break..." Rest In Peace.

The family of John Alan Scott created this Life Tributes page to make it easy to share your memories.

Send flowers to the Scott family.