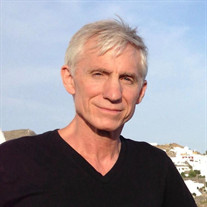 Struthers, John Alexander died at his home, surrounded by family, in Toronto, Ontario July 1, 2021, from cancer, at the age of 67. John was a native Torontonian born to Georgina Dell Struthers (nee Switzer) and James Alexander Struthers. He has one sister, Mary Richardson, who survives him. The love of John’s life, Beth Fanjoy, was his life anchor during the progression of his disease. They spent too few years together after finding each other in later life. He was a devoted brother to Mary, uncle to Sarah, Michael and Emily and great uncle to Lucas, Nyla, Lily and Sofia. John attended public and high school in North Toronto, earned a Master’s in English at Queen’s University and a Master’s in Public Administration from the University of Nebraska. John’s 33 year career was dedicated to education, first as a professor at Seneca College and laterally as Chair of several departments. After retiring in 2014 John embraced his many interests including wood-working, playwriting, and travelling. He was an avid collector of vintage radios, enjoyed taking his 16 year old BMW out for a spin and cruising Jack Lake in his 1956 cedar outboard which he lovingly restored. He was a ruling Elder of Beaches Presbyterian Church, volunteering much of his time including the reframing and installation of stained-glass windows and assisting in the settlement of new refugees. John will be forever remembered and loved for his many acts of kindness, generosity, loyalty, good humour and quiet thoughtfulness. Special thanks to the oncology team at Sunnybrook Hospital and the nurses at SE Health, in particular Hillary who provided loving care. In lieu of flowers the family asks that donations be made to Sunnybrook Research, Lymphoma Society or give.senecacollege.ca/struthers. Please find below the link to the church service held on July 9 to honour John’s life. https://drive.google.com/file/d/1LAlXRY8WqIp2_bjkZVkNNGlIpzI7L9ip/view

Struthers, John Alexander died at his home, surrounded by family, in Toronto, Ontario July 1, 2021, from cancer, at the age of 67. John was a native Torontonian born to Georgina Dell Struthers (nee Switzer) and James Alexander Struthers. He... View Obituary & Service Information

The family of John Alexander Struthers created this Life Tributes page to make it easy to share your memories.

Struthers, John Alexander died at his home, surrounded by family,...

Send flowers to the Struthers family.