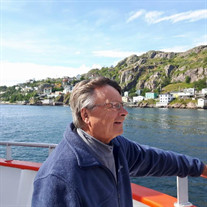 It is with great sadness that we announce the unexpected passing of our beloved husband and father on November 3, 2019 at the age of 73. Peacefully with his loving wife, daughter, son, daughter-in-law, brothers-in-law and sisters-in-law, nieces and nephews by his side. Jon will be lovingly remembered and forever missed by his wife Siobhan Crawley; children Mhairi Kubko and Liam Kubko; daughter-in-law Heidi Kubko; brothers-in-law and sisters-in-law; numerous nieces and nephews; many close friends. Jon was born on February 25, 1946 in Ansbach, Bavaria, Germany. He was the only son of John (Jana) Kubko and Janet (Janini) Kubko (nee Wojcik). Jon landed in Canada with his mother in 1949 to join his father. He spent his youth around the West Toronto area where his parents owned a grocery store at Queen and Roncesvalles. He graduated from Michael Power High School in 1965. He had a passion for music, playing in various Toronto based bands during the 60’s and 70’s, and working alongside his wife to write and produce two acclaimed studio albums in the 80’s. Highlights of Jon’s music career included playing at the Toronto Maple Leafs Stanley Cup victory party in 1967, and receiving a nod from the Canadian music industry via his wife’s Juno nomination in 1986. Jon was a graduate of Ryerson University and the University of Toronto, and worked as a Professional Engineer at Kodak Canada for 37 years. He finished his 41 year career at Sanofi Pasteur before retiring in 2011. Jon loved anything to do with the Canadian outdoors, especially cottage life, boating, snowmobiling, camping, canoeing and fishing; past times he passed down to his children and many of their friends with great enthusiasm and guidance. He was a devoted family man and a dad to everyone. He found great joy in lending a helping hand to all who knew him, and creating a loving community around his wife, daughter and son. Kindness and generosity of spirit were Jon’s way of life. Jon was always looking for or creating fun. Nothing was impossible to him and if he could dream it he did it, both for himself and those around him. It was these things that Jon tried to instill in everyone he knew, and it is this which is his legacy. Celebration of life: A celebration of life will be held at the Brogue Irish Pub, on Sunday, November 17th at 2 pm, 136 Lakeshore Rd E, Mississauga, Ontario. Family and friends are invited to arrive at 2 pm for light refreshments. A memorial celebration will take place beginning at 3 pm, and family and friends are invited to stay and celebrate Jon’s life into the evening. A map indicating the Brogue and where to park can be found at the link below. https://www.zeemaps.com/view?group=3612488&x=-79.583121&y=43.555216&z=1 In lieu of flowers please donate to the Sick Kids Foundation, a charity close to Jon’s heart. A link to their donations page can be found below. https://secure.sickkidsfoundation.com/donate/dedication?utm_source=inhonour-tile&utm_medium=skftribute-redirect&utm_campaign=fy20tributeredirect&utm_content=donation&_ga=2.229558302.326463573.1572975762-1130331066.1572278119

It is with great sadness that we announce the unexpected passing of our beloved husband and father on November 3, 2019 at the age of 73. Peacefully with his loving wife, daughter, son, daughter-in-law, brothers-in-law and sisters-in-law, nieces... View Obituary & Service Information

The family of Jon Peter Kubko created this Life Tributes page to make it easy to share your memories.

It is with great sadness that we announce the unexpected passing...