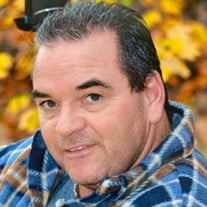 Joseph Aloysius McCarthy Benoit’s Cove, Newfoundland November 4, 1962- May 25, 2021 It is with great sadness that the family of the late Joseph (Al) McCarthy regretfully announces his sudden passing on Tuesday May25, 2021 at the Bowmanville hospital in Bowmanville, Ontario at the young age of 58. Al was a loving, caring, hardworking man who loved music almost as much as his children, Angela (Shane) Purchase, Jennifer, Stephanie and Haley (Kevin) and his grandchildren Ryder, Jacob and Scarlett. Along with his children and grandchildren, he also left behind his best friend and life Partner Sandra Stevens, his brother, Donald (Maureen) McCarthy and sisters Veronica Greene, Leverne McCarthy, Mary Ann (Wayne) MacDonald, Evelyn Wheeler, Pauline (Gerald) Boudreau and Jackie (Andrew) Marchand. Al was born in Benoit’s Cove on November 4, 1962 and was the youngest son to (Predeceased) Joseph and Elizabeth McCarthy, his brothers in law, Clyde Greene, Henry wheeler and Hayward Snooks. He had a very large circle of nieces and nephews and a large extended family who were all very special to him. Family was everything. He had very special friends in Ontario who were like family to him. Harold (Joan) Hoskin (mom and dad), Kevin (Cherry) and Brian (Stacey) who have been by his side for the past 25 years. At Al’s request, cremation has taken place A service will be held at a later date as he also requested to be laid to rest along side of his parents in Benoit’s Cove.

Joseph Aloysius McCarthy Benoit&#8217;s Cove, Newfoundland November 4, 1962- May 25, 2021 It is with great sadness that the family of the late Joseph (Al) McCarthy regretfully announces his sudden passing on Tuesday May25, 2021 at the Bowmanville... View Obituary & Service Information

The family of Joseph Aloysius McCarthy created this Life Tributes page to make it easy to share your memories.

Send flowers to the McCarthy family.