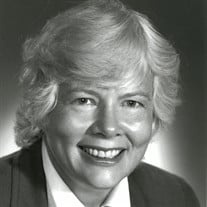 JUNE ROWLANDS (née Pendock) 1924 – 2017 Surrounded by her loving family and dedicated caregivers, June passed away peacefully at Wellesley Central Place in Toronto on December 21st in her 94th year. June Rowlands was a true force of nature, a community activist, a trailblazing politician and Toronto’s first female Mayor from 1991 to 1994. She grew up in north Toronto, attending Lawrence Park Collegiate and the University of Toronto, and began her career in the 1940s as a service rep with Bell Canada. There she met future husband, Harry Rowlands (1922 – 1989), who had returned from serving overseas as a pilot and navigator during WWII. Married in 1947, June and Harry had five children, including two sets of twins. A lifelong activist, June advocated for the developmentally challenged, the elderly, the poor and victims of domestic violence. She sat on numerous boards, including the Association of Women Electors (AWE), the Family Service Association and the National Council of Welfare. As an active member, and later president, of AWE in the 1950s, she developed a strong interest in housing issues and the plight of underprivileged families in Toronto’s poorer neighbourhoods. June was active in a ground-breaking effort to rehabilitate a run-down part of the city, known as Trefann Court. In the ‘70s, June served as Research Director for the Liberal Caucus at Queen`s Park, and made her first bid for public office in 1975, running unsuccessfully for a seat in the Ontario Legislature. The experience served her well, however, and the following year she was elected Alderman in the North Toronto’s Ward 10. She excelled as a city politician, becoming Toronto’s first female budget chief, first woman TTC Commissioner, and eventually, chair of the Toronto Police Services Board. In 2004, Davisville Park was renamed June Rowlands Park in her honour, an unusual tribute for someone still living. June was a tenacious and outspoken advocate, willing to voice unpopular opinions and stare down political foes. At 67, she was elected mayor of Toronto, while also serving as budget chief during challenging recessionary times. June was blessed with a youthful radiance throughout her long life, and enjoyed boundless energy and resilience. She had a zany side too, and a sense of the ridiculous – her campaign against pantyhose that disintegrated too easily, comes to mind. The city politician was also a devoted cottager, spending weekends and summers at Lake Kashwakamak in eastern Ontario. She is survived by her children: Doug, Joyce, Murray (Gretchen Van Riesen), Bruce (Anne Bermonte) and Alec, and grandchildren Eryn Koncir (Zach), Taylor, Katerina and Rachel. A Celebration of Life will be held to remember June on January 16th, 2pm, at Rosedale United Church, 159 Roxborough Dr. TTC: Rosedale bus 82 from Rosedale subway station; parking available on neighbouring streets. Wheelchair ramp. In lieu of flowers, donations would be gratefully received by Wellesley Central Place for their recreation and palliative care programs. Never forgotten, forever in our hearts

The family of June Rowlands created this Life Tributes page to make it easy to share your memories.

Send flowers to the Rowlands family.