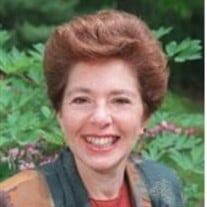 Kate Froehlich Hays July 6, 1943 – April 1, 2021 With her spouse and son holding her hands, Kate F. Hays quietly slipped away by medical assistance in dying on April 1, 2021 at the age of 77 in Toronto, Ontario, Canada after a three-year struggle with leukemia. She is survived by her partner Jeffrey Brown of Toronto, her son Eliot Lothrop and his spouse Mary of Vermont, and grandchildren Mason and Isabella. A legend and pioneer in the field of sport, exercise, and performance psychology, Kate maintained an independent practice, The Performing Edge, first in New Hampshire and later in Toronto. She obtained her B.A. from the University of New Hampshire and her A.M. and Ph.D. in clinical psychology from Boston University. As a psychologist with 50 years of innovative and influential contributions in her field, Kate was not only a master practitioner but also an educator and scholar in the field, an “independent scholar” as she described herself. Aside from numerous published professional articles, book chapters, and presentations regarding physical activity, mental health, and the emerging arena of performance psychology, she also authored or edited five books that continue to inform the public and practitioners in the field. Until just weeks before her death, she was writing her blog affiliated with Psychology Today, conducting tele-consultation groups for aspiring and engaged sport psychology practitioners, and mentoring individual practitioners. Kate was recognized as a titan in the field of sport, exercise, and performance psychology. She was a founder of the division of the American Psychological Association (APA) that focusses on this discipline and served as its President, representative on the APA’s Council of Representatives, and member-at-large. Over her long affiliation with the APA, she also represented New Hampshire and Ontario on the Council and received the Bruce Ogilvie Award for Professional Practice. Within APA’s governance, she was elected to (and chaired) various major boards, including its Publications and Communications Board. At her death, she was art co-editor for American Psychologist, APA’s flagship journal. In November 2020, she received an APA Presidential Citation to recognize her contributions and accomplishments within APA and the field of sport, exercise, and sport psychology. Her service to sport, exercise, and performance psychology extended well beyond the APA. She was also a Fellow of the Association for Applied Sport Psychology (AASP), a Fellow of the Canadian Psychological Association, listed on the registry of the US Olympic and Paralympic Committee, and past-Chair of the International Sport Psychology Council. She delivered the Coleman Griffith Lecture, one of AASP’s most prominent lectures and later received AASP’s Distinguished Professional Practice Award. Kate grew up in New York City, amidst the swirl of cultural and political activity in Greenwich Village. Her mother was a pioneer in documentary film editing and her grandfather a founder of the American Civil Liberties Union. This early immersion in social justice led her to focus on community mental health: “giving psychology away.” Kate was an avid runner and yoga devotee, interests that initially brought her to sport psychology. Her life-long enthusiasm with fine arts and music—she played recorder and sang with numerous choral groups—led her to see the connections between sports and the performing arts. Jewelry making provided an outlet to combine creativity and crafting. In the past decade, Kate and Jeff purchased a lakeside cottage in Vermont so that they might spend more time with their son, daughter-in-law, and their grandchildren—and she was a fantastic grandmother! The APA division of sport, exercise, and performance psychology summed up her extensive contributions to psychology: “Kate was a trailblazer for women in the field . . . and a mentor to many students and professionals.” A celebration of Kate’s life will take place virtually on May 1, 2021 at 1 pm (Eastern Daylight Time). Kate’s friend Mark Morrison-Reed will facilitate the memorial. You will find the link at https://middlebury.zoom.us/j/99475440994?pwd=VHhsQkJwTEtqTXFHM0ZoTVQzMTY0UT09. We will offer opportunities to gather online in smaller groups at the conclusion of the planned service. Kate wanted any acts in her honour to serve community activism in many different spheres. She requested that donations be made in her honour to The American Psychological Foundation (designate to APA Division 47, Section 2), Orpheus Choir of Toronto, The Arthur Garfield Hays Civil Liberties Program at New York University, AASP Foundation, Ontario Psychological Association, or The Princess Margaret Cancer Foundation.

The family of Kate Froehlich Hays created this Life Tributes page to make it easy to share your memories.

Send flowers to the Hays family.