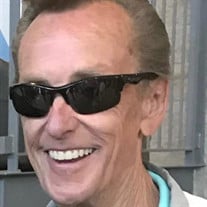 In Loving Memory of Kenneth (Ken) Newton November 25, 1946 -August 9, 2020 It is with great sadness that we announce the passing of Kenneth (Ken) Newton at the age of 73 on Sunday August 9, 2020 in Toronto, peacefully, with his beloved wife by his side. Ken was born in Saint John, New Brunswick on November 25th, 1946. He married Linda on June 20, 1968 and they moved to Toronto to start their family. Ken worked in the automotive industry for many years, eventually owning his own business. Always a hard worker and genuinely nice guy, he acquired many friends along the way. Ken was a loving husband to Linda for 52 years and a devoted father to his two children, but his very favourite role was Grandad. He adored his 3 grandchildren, who he loved to spoil,and he was often called Grandad by extended family and friends. Ken is survived by his loving wife Linda (nee Robichaud), his children Christina Knox (Paul) and Ken Lee-Newton (Irene) and his grandchildren Erika, Jason and Olivia. He also leaves behind his parents Kenneth and Ethel (nee Hyslop) and family Steve (Rose), Kevin (Theresa) and Rosemary. He is predeceased by his brother Larry. He will be missed by many nieces, nephews, extended family and friends. At Ken’s request, there will be no funeral, however we will be holding a Celebration of a Life in the coming weeks. Details will be provided as they are available. In lieu of flowers, and in honour of his great love for his grandchildren,donations to Sick Kids Hospital would be appreciated http://my.sickkidsdonations.com/kennethnewton. Rest in Peace, we will miss you and remember you with love forever.

The family of Kenneth "Ken" Newton created this Life Tributes page to make it easy to share your memories.